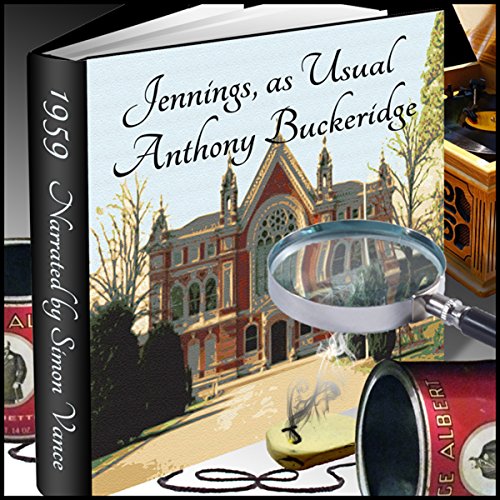 Jennings starts the second half of the Christmas term by accidentally setting his “india rubber” (erasure) on fire, it seems the residents of Linbury Court are going to have an exciting few weeks. Along with “High Fidelity Telephonic Communication” (or two tins and a piece of string), the 'Affair of the Assistant Masterpiece' and Jennings suddenly becoming a musical prodigy, Old Wilkie is definitely not going to get any peace and quiet. Mouldy chizz!

Jennings, As Usual is one of a series of 25 books by Anthony Buckeridge. The Jennings stories originated in a series of radio plays for the BBC’s Children’s Hour, which proved so popular they spawned this delightful series of books. The tales make liberal use of Buckeridge's inventive schoolboy slang ("fossilised fish hooks!," "crystallised cheesecakes!," and others). Published between 1950 and 1989, these books were favorites among a vast assortment of kids all over the world. Jennings Goes to School and Jennings Again! were adapted for radio by Anthony Buckeridge and read by Stephen Fry, and Mark Williams (Aurthor Weasley in the Harry Potter films), recorded an abridged version of Jennings Little Hut, all produced by the BBC. Loved by kids and adults alike, the Jennings books were translated into several languages and have sold over six million worldwide. Described as “Harry Potter without magic, but funnier,” and “P.G. Wodehouse for kids,” you’ll want to check out the other titles in this series available from Post Hypnotic Press.

What listeners say about Jennings, as Usual

Can't Wait for the Next One

Yes. So funny and full of adventure. Wonderful story!!

Being constantly on the edge of our seats wondering how Jennings would solve his problems!

Have you listened to any of Simon Vance’s other performances before? How does this one compare?

Even though I am a pensioner, I never tire of these funny and enjoyable forays into the amusing and perplexing world of Jennings and Derbyshire.