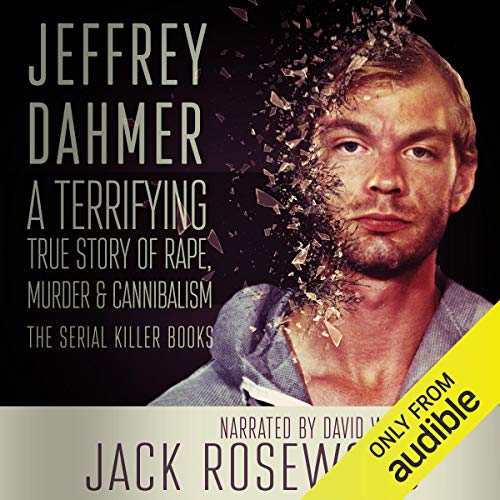 Few serial killers in history have garnered as much attention as Jeffrey Lionel Dahmer. Although Dahmer killed 17 young men and boys, it was not so much the number of people he killed that makes him stand out among famous serial killers, but more so the acts of depravity that he committed on the corpses of his victims.

In this true crime story, you will listen to how Dahmer transitioned from a loner to serial killer, committing numerous unnatural acts along the way such as necrophilia and cannibalism. Following in the macabre tradition of another infamous Wisconsin serial killer - Ed Gein - Jeffrey Dahmer terrorized Milwaukee for most of the 1980s until he was finally captured in 1991.

Perhaps one of the most frightening aspects of Jeffrey Dahmer's serial killer career was how easy he was able to lure his victims into his trap. Dahmer possessed above average intellect, was conventionally good looking, and usually had a calm demeanor that could disarm even the most paranoid of people. Because of these traits, Dahmer was able to evade justice numerous times, which allowed him to keep killing. Truly, Dahmer was able to fool his family, the police, his neighbors, and even the judicial system into believing that he was not a threat; but during the entire time his kill count increased and the body parts of his victims began to pile up around his apartment.

Purchase this audiobook to listen to a story that is among the most disturbing of all true crime serial killers. You will follow the course of Dahmer's life from an alcoholic outcast in high school to a vicious predator who stalked the streets of Milwaukee. Finally, you will hear about Dahmer's trial, his jail house murder, and the impact that his many crimes had on Milwaukee.

Absolutely perfect. This is exactly what true crime fans are looking for; I loved it.

Where does Jeffrey Dahmer: A Terrifying True Story of Rape, Murder & Cannibalism rank among all the audiobooks you’ve listened to so far?

It's in the top 10 of my favorite true crime books.

Which character – as performed by David L. White – was your favorite?

No favorite character but Mr. White was an excellent narrator for this book.

yes, but some parts were awfully gruesome..as expected

I've read and watched several things on Dahmer so I didn't expect much new information from this book. However, this book did surprise me. It is well written and thorough. It goes into detail from childhood until his death. I would definitely recommend it to anyone interested in Dahmer or serial killers in general. I was voluntarily provided this free review copy audiobook by the author, narrator, or publisher.

Oblivious to the killers among us 💀

This book covers the information the media gave plus interviews with Jeffrey where he explains why he did it.
To a sane person the reasons why will never be clear.
The most horrifying thing is most serial killers appear so normal they could be anyone including your neighbor or friend.
The speculation on whether the prison guards allowed Jeffery's own death is still a mystery.
I'm interested to hear who's up next in this very detailed series about serial killers.
The narrator did a good job.
His voice is a perfect fit for this book.
I was given this book in exchange for my honest review.
Is it worth a credit?? I think so.

This was the better of 2 books about JeffreyI have read so far. This book just felt more authentic, based on truth and I enjoyed the analytical pie we at the end. The conspiracies about his death have me very intrigued. Well done.

Somebody below said it was like listening to a really long high school essay, well he was right. Considering the topic is so interesting I am not sure how it came out so dry, it doesn't go into any detail, or add anything insightful beyond a Wikipedia page. If you a True Crime fan and already know about Dahmer and the murders he committed, I suggest you skip this one.

A Biography of a Monster

If you could sum up Jeffrey Dahmer: A Terrifying True Story of Rape, Murder & Cannibalism in three words, what would they be?

What other book might you compare Jeffrey Dahmer: A Terrifying True Story of Rape, Murder & Cannibalism to and why?

Which character – as performed by David L. White – was your favorite?

This is a biographical work, there isn't character interpretation. It is well written, and David L. White does a superb job getting the book across as written.

Empathy for the victims, disgust with Dahmer.

Thanks for the opportunity to listen and offer my opinions on this work!

A review copy was gifted to me at no charge. In return, I am happy to provide an honest review. Also at no charge.

I didn’t know the extent of his horrific acts, scary. Lost my appetite at times listening to the details.

Very informative, great narrative on Dahmer’s life and details about his twisted mind. Would recommend if anyone is interested in his life story.

Captivating and disturbing at the same time. A short listen of just over three hours but also more than enough to give you a complete timeline of his life and the macabre, terrifying crimes he committed.

Scary what can happen

Was gripped from start to finish. Couldn't believe someone could be so evil. Must listen to believe!

A brilliant book by Jack Rosewood, very interesting, a fascinating story, I always wish books as good as this could be longer