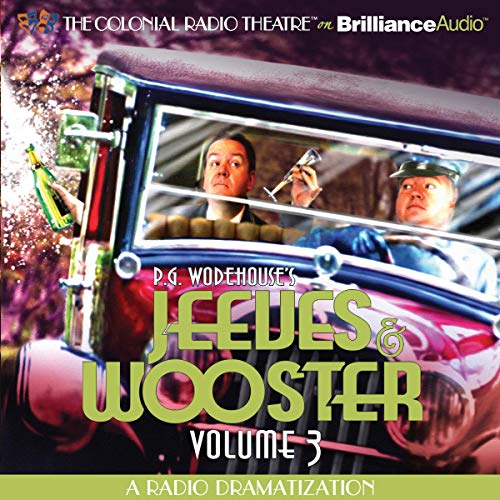 "The Aunt and the Sluggard": I say! What's to be done with Bertie Wooster's chum Rockmetteller Todd? Rocky's Aunt Isabel wants him to live the life of a New York socialite but the poor chap loathes the city with his whole bohemian soul. Bertie's valet Jeeves has a master plan, of course, but it requires Bertie to leave his luxurious apartment. Worst of all, without Jeeves, he has to pick out his own socks and cravats! Surely this is more than man - civilized man that is - can bear!

"Jeeves and the Hard-Boiled Egg": Dear old Bicky (also known as Alistair Bingham-Reeves) is in the most frightful spot of bother. His uncle, the Duke of Chiswick, don't you know, thinks Bicky is on a ranch in Colorado, when he's actually living in New York and dreaming about chickens. I wouldn't fool you, old top - when I say chickens, I mean actual chickens! Bicky looks to Bertie for advice and Bertie, naturally, expects Jeeves to rally round. But when his apartment is infested with tourists from a small town in Missouri, the young master starts to wonder if his trusty servant hasn't gone completely off his rocker.

What listeners say about Jeeves and Wooster, Vol. 3

I enjoyed the actors voicing Jeeves and Wooster - though I can't vouch for the quality of their accents. There is a perfect little gasp by Bertie at one point that made me laugh in the moment and still makes me chuckle when I think about it. The minor characters weren't as well cast - perfectly clear speakers but without the liveliness of the main actors. The script quality was acceptable - sometimes conversations seemed a bit longish but you have to get in those little narrative touches.

Not the Jeeves and Wooster I love.

If it's not done in the upper class tongue it's just not right. Spoiled it.