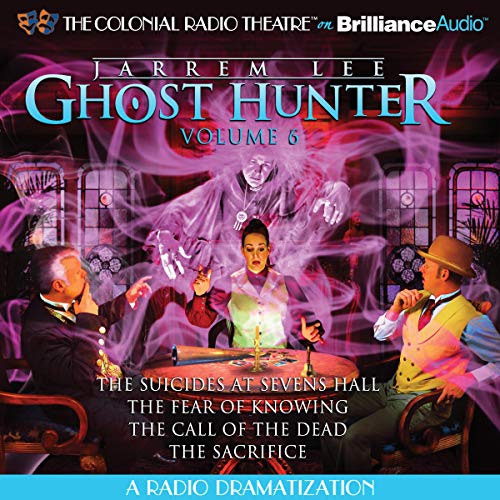 Jarrem Lee - Ghost Hunter - The Suicides at Sevens Hall, The Fear of Knowing, The Call of the Dead and The Sacrifice

In science one reasons by analogy, so when mankind is confronted by experiences entirely beyond its understanding it takes an individual with intelligence and bravery in equal measure to push back the boundaries of the unknown…In London, in the 1900s, the solutions to supernatural occurrences were investigated by a man who was famous for his dealings with the unknown and the worlds of the dead:

Jarrem Lee - Ghost Hunter, (or as he prefers to call it, a psychical detective). With the help of college student Arthur Bennett, he embarks on a series of spine-tingling and exciting adventures in the world of the dead.

Episode 21 - "The Suicides at Sevens Hall" - A terrible curse hangs over the Harkindale family causing each successive heir of Sevens Hall to commit suicide. When Jarrem Lee is contacted by the latest victim, he agrees to stay at the Hall and confront the dark spectre which haunts the family. Based on the story by E and H Heron.

Episode 22 - "The Fear Of Knowing" - Jarrem Lee is used to confronting ghosts, but when the spectra claims to be himself with a warning from the future, it complicates matters. Is this ghost to be believed, or is Lee but a pawn in a more intricate game?

Episode 23 - "The Call of The Dead" - When a wife dies, it's natural that a husband should grieve, but Robert Castlewood isn't in mourning, he's convinced he can still speak to his dead wife.

Episode 24 - "The Sacrifice" - When Sir Henry Redhill is mysteriously assassinated, the Home Secretary calls in Jarrem Lee to investigate. Why? Because the killer was already dead.

©2009 The Colonial Radio Theatre on the Air, all rights reserved (P)2013 Brilliance Audio

What listeners say about Jarrem Lee - Ghost Hunter - The Suicides at Sevens Hall, The Fear of Knowing, The Call of the Dead and The Sacrifice

The stories were great. the Colonial Theater turns rainy boring days into an adventure with their performances.

Last of a great series!

Would you listen to Jarrem Lee - Ghost Hunter - The Suicides at Sevens Hall, The Fear of Knowing, The Call of the Dead and The Sacrifice again? Why?

I would listen to Jarrem Lee Volume Six again because the stories capture a sub genre hardly seen in horror audio. The occult detective. That's the magic of Jarrem Lee. Relistenability. If that's even a word. Plus a listener is treated to occult stories set in a time which never has gone out of style. Victorian England.

What was one of the most memorable moments of Jarrem Lee - Ghost Hunter - The Suicides at Sevens Hall, The Fear of Knowing, The Call of the Dead and The Sacrifice?

The fear of knowing episode was dark. More dark than I've heard previously on this series. And as a result, the episode never leaves you after you've listened to it. Suicides was a great adaptation of a Flaxman Low story. And I've read them all. Call of the dead and sacrifice were both parts of the same story and a solid one.

What about Jerry Robbins and The Colonial Radio Players ’s performance did you like?

I like Jerry Robbins and CRT because they pay attention to detail. Listeners are listening. Lee and Bennett are established characters. Actors and writers don't experiment. I don't think Mr. Robbins nor CRT would do so with Sherlock Holmes either.

No I didn't want to listen to volume six all in one sitting. I knew this was the last of the series and I wanted to stretch it out. Make it last. And I enjoyed examining each episode as a result.

Well done to Jerry Robbins and the CRT team of players! I'll miss Jarrem Lee, but I'll keep an eye out for other excellent work from the Colonial Radio Theater!