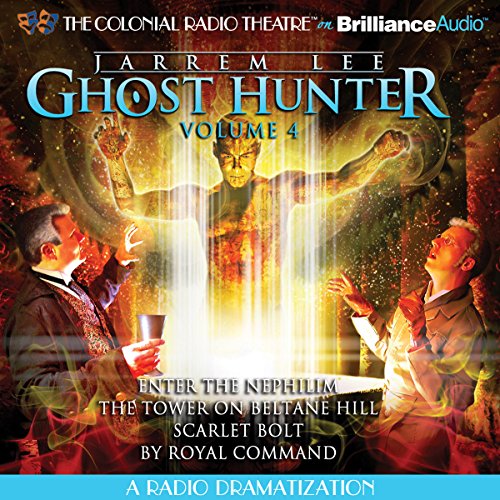 In science one reasons by analogy, so when man is confronted by experiences entirely beyond his understanding it takes an individual with intelligence and bravery in equal measure to push back the boundaries of the unknown….

In London, in the 1900s, the solutions to supernatural occurrences were investigated by a man who was famous for his dealings with the unknown, and the worlds of the dead....Jarrem Lee - ghost hunter....

Meet Jarrem Lee, ghost hunter (or as he prefers to call it, a psychical detective). With the help of college student Arthur Bennett, he embarks on a series of spine-tingling and exciting adventures in the world of the dead.

Episode 13, "Enter the Nephilim": The sprits of the Nephilim want Lee to bring them back to Earth.

Episode 14, "The Tower on Beltane Hill": Mysterious deaths are occurring when a wealthy land owner is trying to clear away trees on his property.

Episode 15, "Scarlet Bolt": The Derby is the oldest horse race in the world. When the favorite, Scarlet Bolt, is haunted by a mysterious apparition, Jarrem Lee is called in to prevent a terrible tragedy.

Episode 16, "By Royal Command": Crown Prince Karl is convinced he’s been attacked a werewolf. Jarrem Lee is commissioned to persuade him otherwise, but what if his terrifying dreams are really true? Based on a story by Max Rittenberg.

What listeners say about Jarrem Lee - Ghost Hunter: Enter the Nephilim, The Tower on Beltane Hill, Scarlet Bolt, and By Royal Command

loved the stories, actors were very talented, fast paced, with witty fun, I plan to listen to the the rest of these wonderful audios in the near future

I love the old radio stories, Jarrem Lee makes stories come to life. The way they are acted out gives you the sense that your right there with them. Great story lines, they are just a joy to listen to. I get them every time a New story comes out and I am never disappointed.

After the suspense filled, melancholy cliffhanger ending of the last volume, the opening comeback is a pleasant and unexpected solution. To prevent spoiling this wonderful show, I'll forego any plot details. I will venture to state though, that anyone who has been a Jarrem Lee fan through the first 3 collections will thoroughly enjoy the clever, entertaining resolution. It should be stressed however, if you haven't had the opportunity to listen to Ghost Hunter before, this would be a bad choice to start with. Don't get me wrong...each tale is terrific (as per usual), but new listeners may be lost or confused. At the very least, you'd be stuck with several questions as to what came before in earlier stories. I recommend this volume to any Jarrem Lee listener; and, for those who want to see what I am praising so highly, buy the first volume soon. If you like radio plays like me, you'll soon own them all.

To those listeners and members of Audible, be it either the UK site or the USA site, if you like listening & follow the adventure of Jarrem Lee: Ghost Hunter, then you will not be disappointed at all, with the current lot of the Jarrem Lee: Ghost Hunter stories, "Enter The Nephilim" explains to you very neatly how Arthur Bennett along with Jarrem's Friends & Colleagues are able to rescue Jarrem, who was thought lost at the end of the prior tale - "The Last Stand", as you listen to these tales, or do as I have done, start from the very start of Arthur Bennett & Jarrem Lee's adventures together, you will find yourself very neatly enfolded within the four stories, but even better is that, for a non-fan of Jarrem Lee: Ghost Hunter, is that you can start listening to either one of the first 4 volumes of Jarrem Lee's adventures, and be able to pick up the threads of whichever tale you are listening to, without having to know anything about either Jarrem Lee or his world..

So all in all I would very highly recommend both the current volume as well as the previous 3 volumes of Jarrem Lee - Ghost Hunter....