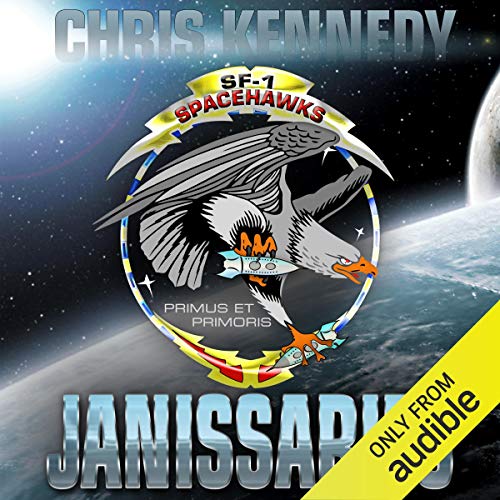 The war with China was over and Lieutenant Shawn "Calvin" Hobbs just wanted his life to go back to normal. The hero of the war, he had a small ream of paperwork to fill out, a deployment with his Navy F-18 squadron to prepare for, and a new girlfriend to spend some quality time with. Life was good. Until the aliens showed up. They had a ship and needed to get to their home planet, but didn't have a crew. They had seen Calvin's unit in action during the war, though, and knew it was the right one for the job. There was just one small problem - a second race of aliens was coming, which would end all life on Earth. Calvin's platoon might want to do something about that, too. Having already won a terrestrial war with 30 troops, winning an interstellar war with nothing but a 3,000 year old cruiser should be easy, right?

Janissaries initiates The Theogony, a trilogy that takes Lieutenant Hobbs and his Special Forces platoon to the stars where they will learn that there's much more to Earth's history than is written in the history books!

What listeners say about Janissaries: The Theogony, Book 1

Would you listen to Janissaries: The Theogony, Book 1 again? Why?

Yes, I would. Listening to it again allows for me to pick up on what I missed the first time around. The story is engaging enough to not get bored a second time around. The voice acting, however, is just a little bit stilted at first. The man reading the story seems to be as much of a machine as Solomon.

What other book might you compare Janissaries: The Theogony, Book 1 to and why?

The book can be compared to most any other contemporary sci fi book around. The author's attempt to meld the world's religions into the book is a nice touch, but if you are very very highly religious and can't stand anything that seems like blasphemy to your faith, do NOT read this book.

Which character – as performed by Craig Good – was your favorite?

My favorite character is the XO of the entire group. He reminds me of my father, who was actually a Green Beret.

Sometimes, again the narrator let the book down just a bit in that regard. There may have been points in the book that were supposed to make a tear fall or something like that, or shock me, but the delivery by the narrator stifled it for me. I did laugh at a few parts, but those were rare.

The book is an excellent start to the series, picking up at just the right spot and putting just enough of a threat forward to make the events in the series plausible without putting you into a frame of mind that the heroes should die or that the enemies will be a pushover. People die, damage is received, and the plans are executable. I found myself drawn into the political aspect on Earth as well.

The narrator completely destroyed this book for me. It was as if I was listening to a computer read the text. The inflection and tone was either non-existent or in consistent with the written word. What a disappointment. Do not waste your money.

Would you ever listen to anything by Chris Kennedy again?

Anger at paying so much and disappointment.

Failed pitch for a TV miniseries

Chris Kennedy 1st installment of the Janissaries: The Theogony is an unsophisticated tale more suitable to 1950's style sci-fi for pre-teens. Basically, Earth has been under the watch of an alien race with much of Greek mythology deriving from a prior contact. The alien communications beacon stops working and is interpreted as indicating that a previously believed extinct alien race of 10 foot man-eating frogs is still around and intends to invade Earth for a banquet. What ensues is an eclectic band of GI Joes types who ally with the watching aliens using technology from another extinct alien race that happens to be hanging around Earth and begin an adventure to save the planet and start exploring the galaxy.

The sci-fi elements are basic and crude: wormhole travel for spaceships along with anti-matter and laser weapons. The multiple alien races are either humanoid or variants of terrestrial animals (birds, frogs, and lizards). Naive geopolitics include the US president getting a phone call from a war hero to come alone regarding an issue of national security. World leaders use body double for secret meetings and no one other than a select few know anything. "New" top secret classifications need to be created with the president working on establishing a unified world government. All of this is based on 3 aliens just saying so. Russia has reverted back to the KGB with a stereotypical femme fatale. The multiple aliens are either pacifists with a prime directive or blood thirsty carnivores who are pure evil and want to eat any intelligent life form.

The narration is suboptimal with alien renditions of boring college professors and alien contact at the level of "we'll be your friends if you help us.". Also annoying is the repetition of the same information over and over again to different characters. There's a distinct lack of subtlety and nuance.

What would have made Janissaries: The Theogony, Book 1 better?

Eliminate the childish humor, and it is way too obvious that the narrator is reading every word. His storytelling ability is in need of much work, however he does have a good voice and potential. He needs to know better of how to tell the story and not read the story. I keep trying to imagine if the adolescent humor was delivered better if it would occasionally be remotely funny. I can't seem to come up with a good delivery ideas for any of the 'trying to be funny'

Would you be willing to try another book from Chris Kennedy? Why or why not?

Doubtful, certainly not with the same narrator.
The attempt at humor was like scratching on the chalkboard.

Very little, however he does have the voice for it. I get audible books so as to HEAR a believable (or not believable) story, not to have someone READ me the words of a story

What character would you cut from Janissaries: The Theogony, Book 1?

The twins, or else aah... Never mind

I'll probably finish it in bits and pieces, and in between books as I seek out a good series, but it's kind of like... Well – Imagine your extremely hungry, haven't eaten for two days and finally a given the opportunity to eat what's on the menu. Except you don't know what's on the menu but someone is reading the menu out loud standing about ten paces away and in between you and them, five paces away is a full-size chalkboard and someone is slowly raking their fingernails up and down it constantly, yet you can't plug your ears are walk away because you just got here what's on the menu...

Where to start.
The story is very weak, as are all the characters. There is no depth in the story at all. The book is not boring, but you should not expect any excitements either.
It reminds me of a SF B movie, where the best way to enjoy it is to disconnect half of your brain.
All the historical references are inaccurate at best.
PS.
Chis Kennedy
Janissaries are known from the Otoman empire, not from Persian empire.

A good story, if a little idealistic. Suspend reality and and enjoy a story based on an older format where good guys are not only good but smart and innovative, bad guys are bad, and a bit dense, and it’s time to save the world, again. It’s a fun book that once I started it I didn’t want to quit until I finished it. My only complaint, which is a small one, is that the narrator does not have a great voice range and it can get a bit confusing on who is supposed to be speaking.

the story premise is not new, but was fleshed out well enough. the characters are a bit stereotypical and flat, but not so flat they the story is unduly impacted.
Narration:
this is my subjective opinion. The narrator is not a bad narrator. He has a good voice and very clear diction, however I don't think his style of narration is a good fit for this story. his narration would be a good fit for a children's book or a light romance novel, but this book would benefit from a different style, hence the 2 stars for the performance.

This a great beginning to a great story arc through two trilogies. I like how he links mythology to alien intervention and this also continues throughout his books in this series.

What I don’t like: The narrator, his diction is strange and distracting. He doesn’t put me to sleep like some narrators, but I don’t like him.

The story overpowers my intense dislike for the narrator and is worth listening to.

What happens when you are approached by beings claiming to be aliens who are insisting a worse alien race may be looking to invade Earth?

Janissaries follows a Lieutenant Shawn “Calvin” Hobbes, two years after successfully defending the US from the Chinese invasion, after he’s approached by aliens who want the humans’ help getting home. Along the way, they find out some unusual secrets about human history, and how some myths and historic events may have ACTUALLY happened.

A great start to a mil sci-fi series that I’m looking forward to diving further into. I definitely recommend it.

I already knew I loved the book but I also enjoyed the reading. very good job on both their parts.

aliens contact earth. they explain we are in deep caca. we go out to find some help.

Not my choice for narrator, sorry

Narrator is really wrong for this series so gave it 4 not 5 stars.
many of the people on the ship have (handles), which should help but actually make it sound a little childish instead. also very minor point but irritated me somewhat, using the word "wilco" and then explaining it was unneccessary due to the context it was used in. It made me feel that the writer was condescending slightly.

Well written and I enjoyed the book. It did not try to be to complicated. well narrated as well. Looking forward to hearing the next book.