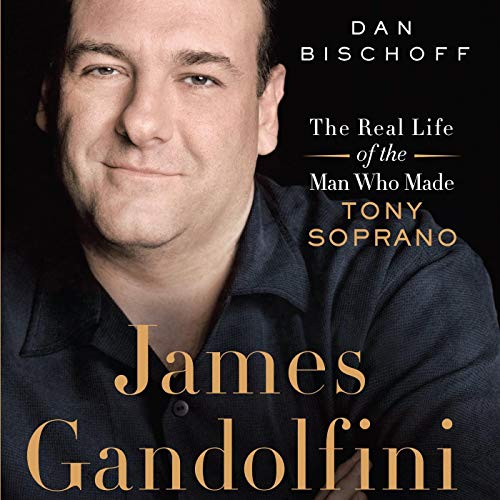 The Real Life of the Man Who Made Tony Soprano
By: Dan Bischoff
Narrated by: John Ventimiglia
Length: 6 hrs and 5 mins
Categories: Biographies & Memoirs, Celebrities
5.0 out of 5 stars 5.0 (1 rating)

James Gandolfini: The Real Life of the Man Who Made Tony Soprano is the first biography of the actor, who died in June 2013 at age 51, widely recognized as one of the best - and most defining - actors of his generation. The audiobook, as performed by Gandolfini's Sopranos co-star John Ventimiglia (Artie Bucco), is informed by fresh interviews with Sopranos actors, HBO executives, the star’s acting teachers and coaches, his childhood friends, buddies from his days as a nightclub bouncer, and Hollywood figures including the directors of his posthumously released films.

Bischoff decodes Gandolfini’s portrayal of mobsters and bad guys from his breakout role in True Romance with Patricia Arquette to the television series role that made his career, including his portrayals of real people like Leon Panetta in Zero Dark Thirty. Gandolfini’s personal life - from his marriages and family interactions to his deep friendships with his fellow cast members - enriches and enlivens this book, and deepens our understanding of the star.

James Gandolfini: The Real Life of the Man Who Made Tony Soprano is a fascinating look at Gandolfini’s complicated relationship to his roots, to the role that made him wealthy beyond his imagination, and to American notions of masculinity, power and fame. Even as he scaled the heights of his profession, creating a TV character as vivid as Carroll O’Connor’s Archie Bunker and as volcanic as Marlon Brando’s Stanley Kowalski, Gandolfini remained a reluctant celebrity dedicated more to his craft than to his career.

James Gandolfini: The Real Life of the Man Who Made Tony Soprano delivers a textured, multilayered portrait of the on- and off-screen life of a complex, talented man who rose from an Italian immigrant family in northern New Jersey to join the ranks of America’s most iconic actors.

What listeners say about James Gandolfini

The Moving Story of a Man Who Touched Our Lives

James Gandolfini, gave a soul to suburban New Jersey dad and mob killer, Tony Soprano. When he died suddenly of a heart attack last year, it felt like a family member had died. But Gandolfini was not Tony Soprano, he was so much deeper, kinder and more complex.

Dan Bischoff’s biography maps out the life of a man that touched all our lives. From his Italian American background, growing up in New Jersey, experiences as a working man, to becoming an actor and philanthropist.

This book gave me insight into the blossoming of an artist, and of a man ready to give back through his work and films for the charity Wounded Warrior Project (never touted in any publicity for self celebration).

John Ventimiglia, who played Artie Bucco on “The Sopranos” really put his heart into narrating this. His performance is that of an insider, fluid and heartfelt.

Written at a tight journalistic clip, this is a great listen.

I'm late to the party when it comes to the Sopranos. I remember when it came out, but I had no interest in it because from the outside all I saw was the harsh side. Twenty years later, here I am binge watching all six seasons and becoming obsessed with the show, albeit because of the character of Tony. So of course now I am devouring all things related to James Gandolfini and I had high hopes for this book.

At best, it was a timeline of his life and career. It's obvious that he was a very private person, because the book doesn't reveal anything that hasn't already been published in every paper and magazine known to man.

The especially disappointing part was how the content REPEATED more than several times while stories or paragraphs word for word, like I wasn't listening the first time. There was no content. No revelations. No inside information. Just a re-telling of the same stuff we already know. Over and over.

I love James Gandolfini. But this was a waste of an Audible credit.

Even more reasons why he will be missed

Lots of background biographical information. A real guy who didn't have to be. Sad his light is no more. Well written & voiced - like a friend telling the story.

Well done with what was available to the author

This was well written and well read. Poorly edited with repeating sentences.

You can sense that the author had very little direct input and had to scrape up details where ever he could. I loved the insight into the character of Tony Soprano.

To the "Amazon Customer" who said there was too much Tony Soprano... With a title like this, what did you expect?

A Bit Flat and Empty

This book had decent insight on the life and times of mega-talented Sopranos actor James Gandolfini. There are two main problems. One, John Ventimiglia (who played Artie Bucco on The Sopranos) comes across as extremely flat, dry, and snooze-inducing. He may be a good character and an insider on James' life, but as a voice-over actor or audiobook narrator he lacks the pizzazz to keep your interest. Two, the material provided by author Dan Bischoff kind of jumps around and does not follow a deeply-dive, highly-researched tact. Instead, you get a few good nuggets here and there but are wanting more.

Dan Bischoff does a great job painting a picture of a reserved man who kept to himself, and kept his entourage quiet. Very few people gave interviews for the work making it tough for Bischoff to find that certain story to capture Gandolfini.

John Ventimiglia does an excellent delivery of the story and stays calm and even keeled without sounding dull.

Overall both Bischoff and Ventimiglia both did the best with what they had but ultimately without insight from many close friends and family there is not a lot of substance here.

“Tony Soprano” was so many different things to so many different people. To some of us, Tony’s appeal was defined not by the primary themes of The Sopranos, but by David Chase’s arc for the character of Tony. Jim Gandolfini was the critical variable. Dan Bischoff brings Jim, not Tony, to life... and back to life... for those of us who miss Jim’s depth, while we reflect on our fortune for the opportunity to have shared in his life, if only as patrons of his art, for what short time we did.

Great listen. I highly recommend this book for any fan of James Gandolfini and his broad range acting talent.

What a shame I didn't appreciate Mr. Gandolfini more while he was alive. Since reading this book I've purchased all of his movies and love each. The narrator was a perfect choice with his NJ accent.

Not a lot of content. Learned that Gandolfini was a generous and private man that made the author have to reuse the quotes and stories at more than one point in the book. This could have been told in a much shorter time but I did enjoy learning more about Gandolfini and I enjoyed the narrator, especially after binge watching the sopranos.

big fan of James Gandolfini and this was a good insight into his life Rip. loved the narration by the actor who plays Artie Bucco in the sopranos

Very nice stories about a very interesting man. Can't help but feel a lot of things are repeated to bulk up the content however

The book was great! there's not a lot to go on really- only a few interviews with the man himself exist. Unfortunately, it is sort of ruined by the constant deja vu of MULTIPLE entire paragraphs and whole sentences repeated over and over again, How can that possibly happen! I understand they must have been rushing to get this book out but how can so much stuff be repeated and surely even John Ventimiglia would notice that he's reading the same parts over and over! It is really bizarre.

Have you listened to any of John Ventimiglia’s other performances? How does this one compare?

Keep a cast list of surnames beside you in order to keep apace!

Pleased to learn of largess to those less fortunate in light of bonkersly huge wages earned. So sad there was ever a need for any addiction of any sort especially with such a charmed work life.

Brilliant actor and fascinated to read more about him. Sad such a short life but clearly lived to the full.

Had the feeling he keeps saying the same things over and over.
Was disappointed.
Such a shame was looking forward to it.

What made the experience of listening to James Gandolfini the most enjoyable?

This is a great way to consume a book: I can multitask yet be listening intently. It is an excellent informative book, I kept thinking about what I had heard for days afterwards.

The inside track on the world's favourite character