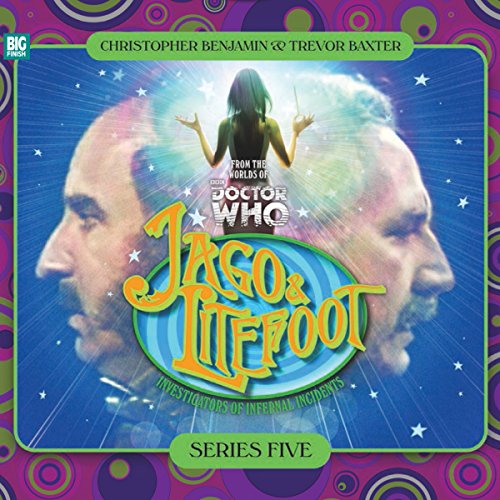 After travelling through time and space with the Doctor, Henry Gordon Jago and Professor Litefoot are back in London starting brand new lives. Jago has become a huge celebrity and Litefoot the quiet owner of a bookshop, but in all other respects it is business as usual.

As they investigate a wealth of new cases - including a restaurant where the food eats the people and a book with dangerous powers - a long game is playing out. A figure from their past is back, and this time he means to destroy them....

Jago and Litefoot in the 60's!

Great fun as always. And now the pair have to get used to living in another era.

Following on from the last series, this series sees the delightful duo in the 1960s; and hilarity and peril ensue. The chemistry between Christopher Benjamin and Trevor Baxter is still there, and I'm keen to download series six...

Great idea of the doctor setting down our valiant Victorians in the wrong era, cavalier is too small a word for that time travelling disaster magnet! The sixties vibe works surprisingly well and the stories have an off beat charm as well as psychedelic idols and frogs.

great performances, Just loved the stories in this sixties romp. A really wonderful taste of the times.

This was the first of the series I have listened to. Thoroughly enjoyed it. 😇