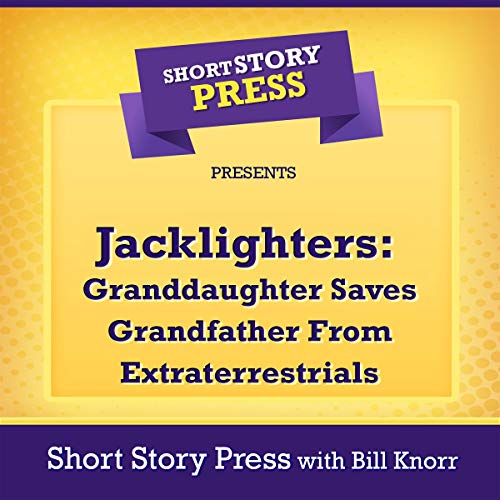 The plot of “Jacklighters” unfolds in the fictitious small Illinois town of Silverton, where life is normally quaint and peaceful. When Riley Jensen hears that Len Wilkins, a family friend who also employs her father as a farm hand, has been found dead with his eyes burned out of his head, her latent but innate heroism emerges.

When news of several deaths of the same nature as that of Len Wilkins’ travels throughout Silverton, Riley becomes gripped with concern and fear for her grandfather Murray, who is a stubborn, leather-tough old man living alone in the countryside, miles outside of Silverton. After Riley’s parents have rushed to the hospital in a neighboring town because her mother Cece is in labor, Riley tries to reach Murray to convince him to come into town and stay until the mysterious deaths are solved, but Murray can’t be reached.

Only 15 and with no driver’s license, Riley takes her dad’s Harley out to Murray’s house to check on him. She arrives to find him under assault by a gray alien with a blinding laser focused directly into his eyes. With ninja-like deft, Riley hops upon a mare, and uses the horse’s hooves to destroy the alien mechanism — and the alien.

With Murray safe, the pair drive back to Silverton just in time for Riley to get the news that she has a new baby brother, Arden. When she goes to see the baby the next day, she is sure he possesses otherworldly intelligence and is convinced that Arden is a star child, come to brighten the Jensen family’s world.

Bill Knorr is a former English teacher and environmental professional who loves composing and recording music, drawing, painting, and writing young adult short stories. He has written over 20 short stories and one novella, all in the Young Adult/Science Fiction/Fantasy genre. From the Midwest, Bill draws much of his inspiration from small town or rural customs and characters. Many of his story ideas have come while hiking in some of the vast and beautiful forested areas of Illinois.

Bill’s day gig is now primarily as a freelance technical copywriter, but he has also been delving into the realm of voice acting. Although much of his work experience has been in the industrial, environmental, or educational fields, his true love is all things creative.

What listeners say about Jacklighters