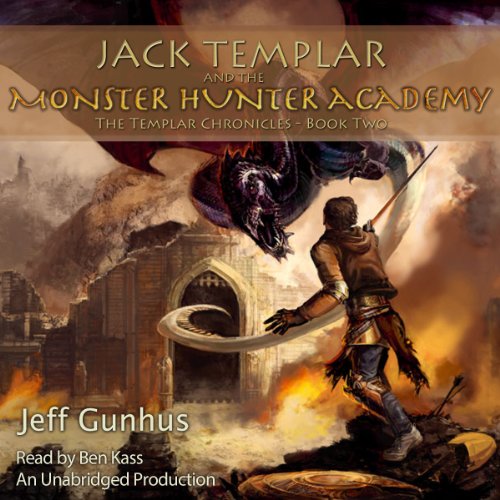 After barely surviving the onslaught of monsters that tried to kill him the day before his 14th birthday, Jack Templar leaves his hometown on a quest to rescue his father and discover the truth about his past. Joined by his friends Will and T-Rex, and led by Eva, the mysterious one-handed monster hunter, Jack sets out for the Monster Hunter Academy where he hopes to find answers to his questions. Little does he suspect that the Academy is filled with dangers of its own, many of them more terrifying than anything he's faced so far.

What listeners say about Jack Templar and the Monster Hunter Academy: The Templar Chronicles: Book 2

Much improvement from the first book.

This book is better than the first book. I felt like some of the characters were starting to develop well. While I like some character more, there were some that I didn't like as well as in the first book. In a way this book reminded me of Percy Jackson, probably because it was an academy, it reminded me somewhat of the Half Blood Camp. The narrator's voice drove me nuts, I ended up putting it on fast speed. There was lots of spots in the audio that would repeat sentences over again.

Better than the first adventure book.

Yes, It is a book that everyone from preteen to adult can listen to and enjoy.

I liked that T Rex grew up and developed more as a character.

It was the time Jack was in the tree and listening to the hunters talking about him.

Yes, The story drew you in and keep you wanting to find out what happened next.

It is better if you read the first book in this series first. The second book develops the characters more and better written.