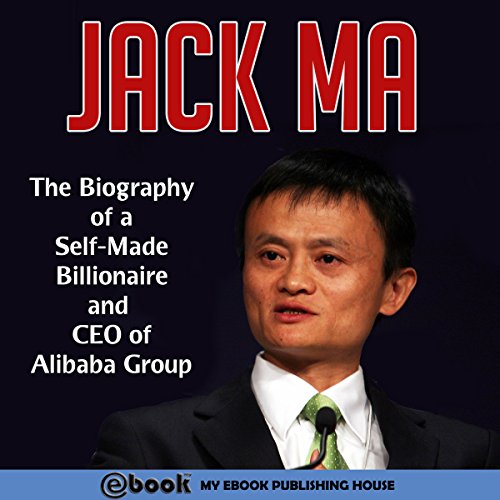 By: My Ebook Publishing House
Narrated by: Matt Montanez
Free with 30-day trial

Jack Ma is the founder and CEO of the Alibaba Group, a privately owned Internet-based e-commerce company in China whose sales are estimated to be bigger than its American competitors eBay and Amazon.com combined. This book reveals a Jack Ma different from your imagination.

How did Jack overcome his humble origins and early failures to achieve massive success with Alibaba? How did he outsmart rival entrepreneurs from China and Silicon Valley? Can Alibaba maintain its 80% market share?

Jack Ma is a man who does not see failure as an option, not a final one anyway. Ma has been through more failure than success in his life, we just don't hear much about it because his success has been so big! Ma's education through failure more than traditional channels has shaped a man that is globally savvy, compassionate and fiercely passionate about entrepreneurship. He recently shared with Charlie Rose, "I failed a key primary school test two times, I failed the middle school test three times, I failed the college entrance exam two times and when I graduated, I was rejected for most jobs I applied for out of college." (Ma was one of five applicants to the police force and the only one to be rejected. Then there is the application as one of 24 applicants to be a KFC manager and also be rejected. "I applied for Harvard 10 times, got rejected 10 times and I told myself that someday I should go teach there." Even in the early success of Alibaba Ma was told by Silicon Valley venture capitalists that his business model was wholly unprofitable and he was sent back to China unfunded. In the face of all this adversity Ma did not give up, give in or blame; he just continued to try.

What listeners say about Jack Ma

This biography does not do justice to Jack Ma. It is poorly written and I'm sure his real stores way more exciting than this narrative. Jack would not be happy about it