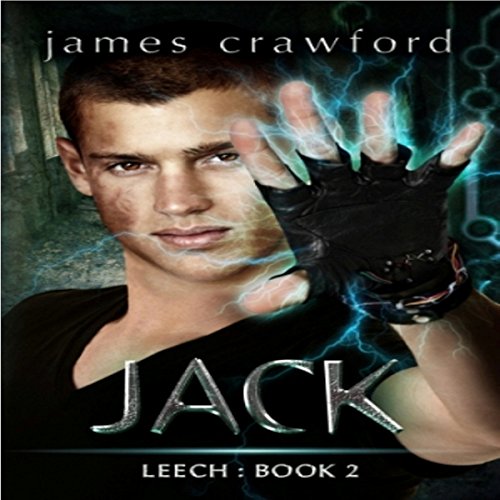 Every high school has it's social elite; the football players and cheerleaders...you know, the popular crowd. At Butler High, Jack Barely was as close to the top as they came. Captain of the swim team, great hair, and abs that most would die for. However, that was all before the Leeches attacked, taking away everything: his popularity, his house, his grandmother, and even his best friend, Caleo, whom he secretly loved. Now, living in a destroyed world, popularity means nothing as Jack struggles just to keep him and his twin sister, Jillian, alive. With attacks happening more frequently, Jack starts to wonder why they are even bothering to try and hold onto the past when it just reminds him of all they have lost. Just when he has given up hope, Jack hears a rumor that Caleo is still alive and sets out on a mission to find him. But will Jack make it to finally tell Caleo how he really feels?

What listeners say about Jack

Not as good as the first one...but enjoyable

I enjoyed this story very much. Perhaps not as good as the first one, but I was engaged enough to care about the primary characters. This story is from Jack's perspective and his regrets and though they were realistic, they did drag just a bit. I wasn't real sure why he was still having such a hard time just stating that he was gay. Another point (spoiler beyond) is I am not sure if there was something missing in the audio version or if the author just neglected to follow through but when Jack was locked up, the expanse of time just happened, which made no sense. Then the reunion between Jack and Caleo was a bit contrived but bearable, I really enjoyed this book. My biggest complaint...the ending sucked...I understand the need for a cliffhanger if there is another book in the series but I do not think that the death was really necessary (being vague as to not spoil). Also, the third part was promised in 2014 and it still hasn't been released, which is disappointing although I know that life happens to authors as well as to their characters...I was just a bit disappointed. All-in-all, a good book that I would recommend...of course you must start with Caleo first...

So the second book starts off a little slow. More of the action begins when you reach chapter 4. The story development felt fast paced with a lot of action sequences. You can never guess what will happen next. While listening to the book I wished there was better sentence structure and wording at times but it wasn’t too distracting. Also, I liked some of the new characters in the second book, like Paris and even Larry. Another positive was that there was more character development between Jack and Caleo compared to the first book which was good, but I wished the author gave us more of a back story of Micky/Stinky. I feel he is still somewhat of a mystery. A lot of twist and drama happens towards the end of the book but hopefully the final book will end well!

Jack and Caleo and Nolan...

The love triangle here is a little awkward because Caleo just turned 18 and Nolan is over 40. Time passes (over 8 months) but lots of the time is spent seperated for long stretches where none of them see each other. This is where it seems odd that Nolan is so in love with Caleo and not wonder if its more like he is in love with the idea of the Angel mixed with his ability to manipulate and control a young adult? This makes it feel akward because Caleo has obvious hero worship toward Nolan and is stressed, depressed, in mourning and scared throughout the series. So with the half truths, left out information, and outright lies it makes it hard to see Nolan as any kind of hero or feel like there is any real "love" from either side.

reading the books was great listening to them has me falling in love with this series all over again, it so amazing!