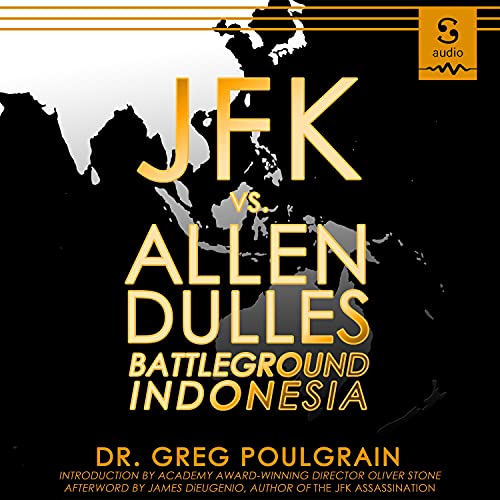 Two of the most fascinating figures in history, John F. Kennedy, 35th president of the United States, and Allen Dulles, our nation’s longest-serving CIA director, often clashed over intelligence issues and national security. However, one such conflict has remained in the shadows until now. JFK vs. Allen Dulles: Battleground Indonesia takes listeners to the vast archipelago 3350 miles wide where this secret showdown occurred.

In 1936, an Allen Dulles-established company discovered the world's largest gold deposit in remote Netherlands New Guinea. In 1962, President Kennedy intervened, and Netherlands New Guinea was added to President Sukarno's Indonesia. Neither Sukarno nor JFK was aware of the gold, since Dulles had not informed Kennedy. Dulles planned a complicated and ruthless CIA regime-change strategy to seize control not only of Indonesia itself, but also of its vast resources, including the gold. This strategy included a push to start Malaysian Confrontation. Yet Kennedy's plan to visit Jakarta in early 1964 would have sunk Dulles' master plan, which included the destruction of the Indonesian communist party as a wedge to split Moscow and Beijing. Only an assassin's bullet put an end to Kennedy’s plan of peace. Did Allen Dulles arrange for JFK to be killed to save his plan and his gold? Was his coup for gold successful with JFK out of the picture?

Using archival records as a basis, Greg Poulgrain adds word-of-mouth evidence from those people who were directly involved - such as Dean Rusk and others who worked with President Kennedy and Allen Dulles at the time; or the person who was with Michael Rockefeller when he mysteriously disappeared in West New Guinea during this whole affair.

What listeners say about JFK vs. Allen Dulles