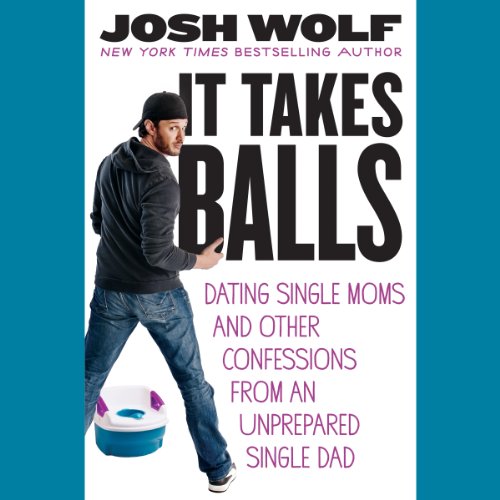 Josh Wolf - one of the stars and writers of Chelsea Lately and After Lately - delivers a hilarious collection of essays that reminds us all what it takes to conquer fatherhood without sacrificing manhood.

Struggling to make it as a stand-up comic didn't always fit with being a single parent. But Josh figured out his own set of rules - through trial and (frequent) error. Early picking up kids from school? The nearby strip club is a great place to kill time and bond with some like-minded dads. Want a drunken heart-to-heart with your son? First make sure there's no Sharpie around in case you pass out. Wondering where to take that special someone at the end of the night? Remember that no sane woman will have sex with you in a one-bedroom apartment where your kids are sleeping - even if you promise to be really, really quiet.

Whether it's revealing the secrets to limitless hookups (hint: it's single moms) and getting rid of your children's friends that you just can't stand (hint: it's not single moms), or blackmailing PTA members and ignoring health codes, Josh is sure to impart some parenting wisdom along the way. Or at least have a good time trying.

What listeners say about It Takes Balls

Sounds like the kinda dad I am, but somehow is able to justify his actions where I just get chewed and spit out lol

I loved it😂
I found myself searching audible for more.
I was laughing the whole time

This book is laugh out loud funny! It's is like you are sitting across the table from him while he tells you some of the most hilarious stories of his life. You will not be disappointed! Get this book if you want big belly laughs and uncontrollable snickers!

Love me some Josh Wolf

I loved this book and was so happy to find it in audio form so I could keep up while driving around day to day. Very entertaining and Josh is and was an amazing father.

Where does It Takes Balls rank among all the audiobooks you’ve listened to so far?

It Takes Balls is right up there with Chelsea Handler's books.

Stories of Josh and his kids made me laugh till I was crying and his antics with his friends had me gasping for breath.

What does Josh Wolf bring to the story that you wouldn’t experience if you just read the book?

The way he delivers his jokes and stories makes it just that much more funny. He has great timing and inflection and delivers each and every punchline.

Overall I absolutely loved this book. The only thing that detracted was that he sometimes meandered into other stories to make a point or to add back story but sometimes it took so long you get a little lost from the original point of the chapter. It would also have the book flow a bit better if the book had followed a more chronological time line. But don't be mistaken: everything he talks about is hilarious so it's really not a big deal.

If you could sum up It Takes Balls in three words, what would they be?

Be sure to check out the Josh & Ross podcast on iTunes!

I can't get enough of Josh Wolf

I love this book so much. I wish he had more to listen to. He is an amazing story teller. Love his sence of humor. This is so worth owning .

I felt like I was right beside him on every story! thanks Josh for such an interesting audiobook

I'd never heard of Josh before but now I'm a true fan. I hope to see more from him. I loved every minute of this book. The story about his daughter and long tooth, hilarious!!

Loved this book ! Hilarious and heartfelt.

I was surprised that this book is so enjoyable. It flows so well you never have a dull moment.

Book is interesting find, funny, a lot of very true stories. Loved it!

Perfect example to how great Audible can be.

I already own this book but the experience of having Josh Wolf read his own stories makes this an absolute must for anyone who’s a fan of his work or for anyone who has a great sense of humour. This has made me laugh out load to myself so much, it’s a book that I would revisited time and time again for sure because it never gets old. Thanks Josh Wolf for sharing.