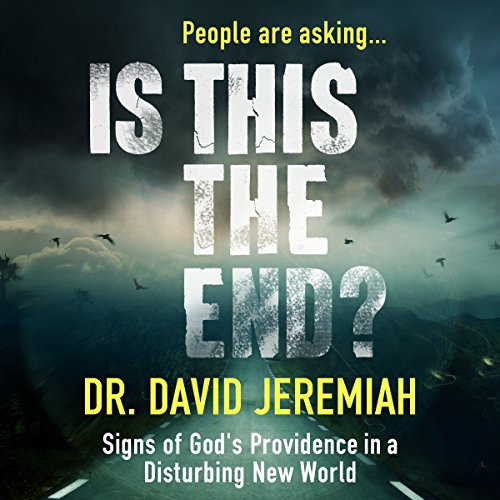 Is This the End?

Is This the End?

The world seems more fractured each day. People are asking, "Is this the end?"

Never have the headlines been this jarring, the cultural changes this rapid, or the moral decay this pronounced. What on earth is happening? After each new occurrence, the most oft-heard questions are "will the world ever be the same again?" and "where is God in all of this?"

Over the last few decades, Dr. David Jeremiah has become one of the world's most sought-after Christian leaders on topics that deal with biblical application and modern culture. And few would dispute that the pace at which things are currently changing is unprecedented. The time has come to accept this new normal, Jeremiah says, and understand how God's hand is still at work on his eternal plan for mankind.

No one can afford to ignore these warnings, but all can better understand the greater story and the role we each play in this changing world. From prophetic clues in Scripture to an understanding of the power of Christ in all believers, this book directs us on a clear path forward.

What listeners say about Is This the End?

Awesome is a must

Love it till the end you should get it you won't be disappointed. Dr Jeremiah is an excellent teacher.

David Jeremiah is one of the best prophecy teachers of our time. I recommend this book for anyone who wants a better understanding of the book of Revelation and signs that we may be living in the last days before Christ's return.

Enjoyed listening to every word. Dr.David Jeremiah was spot on and the narrator did an excellent job delivering Dr.Jeremiahs message.

great thoughts and eye opening. loved it and have listened to it three times! highly recommend

I loved the first half as he brilliantly exegeted today's society, the good, the bad and the ugly. He also put revival and God blessing America in the proper context.
Excellently done.

I was pleasantly surprised!

I did not know the author wrote such great books. Informative and clear about Revelation I look forward to reading more from him

Well worth reading. A lot of information.

If you could sum up Is This the End? in three words, what would they be?

a must-read for everyone

Listening to it for the third time. It is so excellent. Well documented. Factual, realistic; yet not depressing. Full of Hope.

Is this the end?

We are closer than ever. Lots of details and facts. Wish this preacher would fall in love with the King James Bible.

really good felt I learnt a lot well worth getting. can't beat David Jeremiah. Thanks