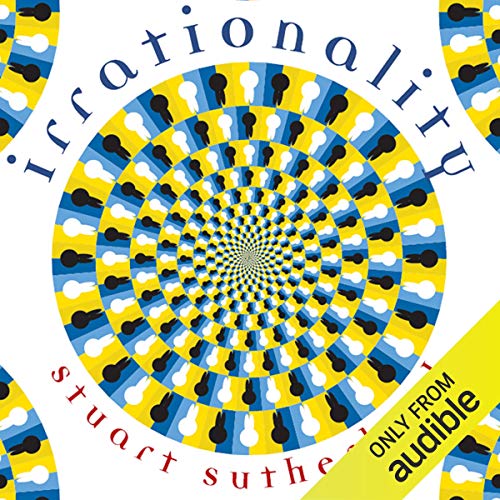 When renowned psychologist Stuart Sutherland died of a heart attack in 1992, he left a wide array of published works, ranging from studies of zoology to a memoir of his life as a manic depressive. Irrationality, his treatise on the nature of human error, is the often overlooked gem in this diverse body of work. Narrating this amusing study with appropriately pedantic gusto is newcomer Chris Dyer, who lets the wit and wisdom of Sutherland’s research speak for itself.

The bulk of the book is divided into chapters, each of which takes on a different reason why human beings are prone to making silly decisions. The selection of data, culled mainly from studies in Britain and the US, is by turns horrifyingly familiar and puzzlingly obscure. Prepare to have your faith restored in the value of having taken that statistics class in high school. Dyer animates a whole host of numbers, turning them into bits of anecdotal fun with which we cannot help but identify. From doctors who peer review the same article twice but are only willing to publish it once, to gamblers who double down like fools, to bureaucrats who pay thousands of dollars to a company for lighting gas lamps in a town with no gas lamps, to passengers freezing on a bus where nobody gets up to close the window, you will sometimes feel outraged that people could be so stupid — the rest of the time, you will be wondering how you yourself could be so stupid.

This is a compendium of research that stands the test of time. Human error is still human error, and does not require any updates. Such a wealth of cautionary tales is tempting to use as a self-help guide, and indeed, there are tips for avoiding the pitfalls of each particular kind of irrationality at the end of every chapter. Still, Dyer lets the author’s good sense of humor shine though, and what you will take away from this book is not so much a better way to make decisions, but a sense that your own case of faulty reasoning skills has not been quite as disastrous as many other cases. — Megan Volpert

Why do doctors, generals, civil servants and others consistently make wrong decisions that cause enormous harm to others? Irrational beliefs and behaviours are virtually universal.

What listeners say about Irrationality

I thought it was interesting and well presented, and even humorous at times - his chapter-ending "morals" list always concluded with a humorous bit. The narration was good.


Stuart Sutherland 1992 book "Irrationality" explores the vast areas of irrational thinking omnipresent in human judgments and decisions. Sutherland was professional psychologist, hence the book is not a set of novel-like digressions about human nature. It is scientifically grounded analysis of sources of our mistakes and misconceptions. For example, it explains how skin-deep obedience, false conformity, biased impressions or communal follies bring disaster to many organisation, from army units (he comes back to the Pearl Harbour attack) through government organisations to business organisations. Some of the examples he gives are just hilarious...

There is a lot about medicine and irrationality there, about false diagnosis that can lead to death and about modern superstitions that still pervade the popular medicine (like homeopathy).

The book is full of examples, explanations and recommendations - how to avoid the irrational thinking in our life. The true goal of the book is - of course - the promotion of true and well based rationality!

Every chapter of the books end with a "moral" - a digest of the chapter content in a form of few most important "sententia".

This is a long one. I almost wish I could buy a reference guide to contain all the facts. This at least means a second listen. It's really important to listen to this book to get an understanding how we look at things and how we interpret facts and statistics. Of course, via the content, we don't neccessarily do it the right way. In fact the experts don't seem to be doing it the right way. So, its best you get this one and start absorbing the information. Pleasent narration, professionally produced, worth the credit.

This book is one of the best researched and put-together books I've read in a very long time. I've always thought of myself as a rational and scientific. Well, I was wrong! The book is supported by studies and scientific papers all of which are cited and can be examined by the reader. I'm a physician. So, the evidence-based approach works very well for me. However, the book is not as dry as textbooks or articles found in scientific journals. It is also not a self-help book, although it gives a thorough insight about what you've considered rational behaviour. Highly recommended.

The combination of witty stories about research studies on irrationality and their implications provided topical narrative that was periodically interrupted by the reading of rows and columns of data tables. This left me muting the audiobook for stretches of time. I'm not certain whether to hold Sutherland, Dyer, or the publisher accountable for this. Surely someone could have come up with a compelling story that interprets the data for the listener--they did so good with the methodologies and results of the studies themselves. Sutherland has a wit that left me anticipating a humorous (and sometimes snarky) bullet point in the summary of each chapter. (And left my wife groaning about it each time, much to my amusement.) The studies themselves were often very similar, and I think the nuances of difference between each result got lost in the spoken format. Each chapter was typically clear in isolation, but more care could have been taken to wind previous chapters into the ongoing narrative more regularly.

This was an entertaining journey through the various ways that humans make bad decisions - with some hints and outright guidance on how to mitigate those failures to some extent, using statistical methods. I loved the "morals" at the end of each chapter - amusing and interesting. And the final chapter puts a fine point on the question many will be asking themselves at various points in this book - "Is it desirable to be rational all the time?" . But I think most can agree that there is some dividing line between a decision that we make for its own sake (playing blackjack because we like it, not because we think we'll get rich) and decisions that could definitely use the methods outlined in this book (What house should we buy in which neighborhood?).

Really good, but heavy in the statistics

This is a great book and gets to my point of trying to convince people to be rational. The book gets a little heavy into statistical examples now and again which is a little tough as an audiobook, listened to while multitasking. Even so, it's not too hard to get his point.

I have twice in recent times observed myself discussing a topic and remembered "the availability" principle and how it relates to day-to-day life. On the other hand, Sutherland uses the example that someone whose father smoked or drank all his life and lived to 100 has nothing to do with the statistics of a large group statistics. He failed to note that genetics might, in fact, make one's father's health experience more relevant than all-people's health. I took that as him deciding full explanation was more detail than he cared to get into. There were several cases in the book where he implied random outcome to non-random situations. However, overall, the book pointed out many non-intutive realities and how and why many people react to situations/ideas the way they do.

Good but not the best on the topic

The topic is quite interesting and the book is quite well done, but some of the same material is handed better in Stumbling on Happiness by Daniel Gilbert.

We are always striving to make rational decisions and operate daily as though we live our lives balancing the costs of benefits available to us. Deep down I have always understood that others may take that road, but I do not. I also thought that it was possible to avoid irrationality, but Stuart Sutherland provides ample evidence that it is a distant goal at best. Essentially, Sutherland in Irrationality makes the case that rational behavior is thwarted because of cognitive processing of data, memory, and perception. Each chapter of the book takes up a different topic and illustrates how our thinking distorts daily life. Chapters of particular interest to me were those on conformity, in-groups and out-groups, misplaced consistency, the use of rewards and punishment, ignoring evidence, and mistaken connections in medicine. Sutherland fills the text with research findings, helpful illustrations, and anecdotes that are easy to follow and entertaining. Particularly helpful is the use of chapter summaries throughout which turn the points made in the chapter into recommendations for action. The reading of Kris Dyer is excellent.

The narration is terrible (high pitched and tense) and made the tedious details even harder to listen to.

Great Topic, but this really goes on

Most of us know on some level that we don't all behave rationally all the time. This book explains through reference to scientific studies several examples of situations where people consistently behave irrationally, and goes some way to explain these. It also discusses the potential effects in the real world, and makes suggestions for how to do things better. It doesn't apply so much to day-to-day decision making as to the bigger decisions, like doctors diagnosing illnesses and prescribing tests and treatments.

I really like the subject, and I think this is well worth a listen, but it does go on a bit with the examples. Not sure if it would read better on paper, but the audio book is very long and does seem quite repetitive.