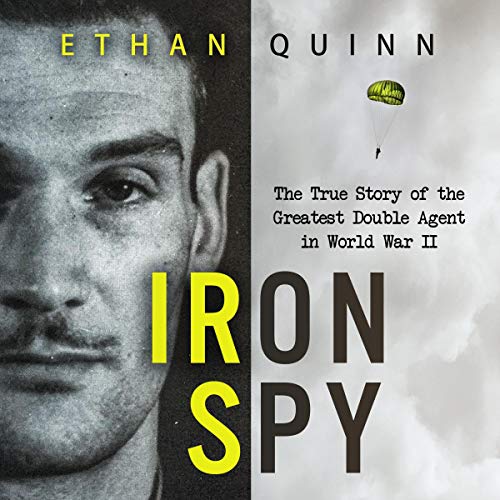 Known as Fritz to his German spy-handlers and Zig-Zag to the British secret service, Eddie Chapman was a man of many faces. While his early life was rife with petty crime, gang activity and a dishonorable discharge from the British military, Chapman’s unique skills were eventually sought out by Nazi Germany, and after convincing them he could use his criminal contacts to sabotage the English forces, he was quickly recruited.

But Chapman’s loyalty to his country knew no limits. A talented, handsome, and reckless Englishman, Chapman was a traitor on the surface but a fearless patriot on the inside. After cracking Germany’s military code, the British sought Chapman for their own affairs, and Chapman was happy to oblige.

Eventually being awarded the prestigious Nazi Iron Cross for services to Germany while acting as a double agent for Britain, Chapman’s espionage efforts involved masterful deceit and feats which few men alive could ever boast of.

Eddie Chapman’s life story is an unbelievable journey of crime, jail-breaks, treachery, and love. He was responsible for saving countless lives during his career, cementing himself as the ultimate double agent during World War II.

What listeners say about Iron Spy

I was given this free review copy audio-book at my request and have voluntarily left this review. This review is for the audio copy of Iron Spy, The True Story of The Greatest Double Agent in World War II by Ethan Quinn and narrated by Guy Mott. This was a very good historical story. It was entertaining and informative. I learned much about the person and other historical insights I had never heard or read of before. The narrator was perfect for this story. I highly recommend this book.

Great Book, listened to it all in one sitting

Wow, what a great story. Listened in one sitting. Highly recommended. Time flew by with Iron Spy.

The British and the Germans certainly had their hands full with a rogue like Eddie Chapman. He led a very interesting, and at times, a very scary life during World War II. Eddie was a criminal who was always interested in bettering his situation - whether it was with the ladies or financially. However, given his history, who could have predicted that Eddie was incredibly patriotic and was able to so deftly play the Germans to Britain's benefit during WWII - and of course, benefit personally.

The narrator, Guy Mott, did a good job. I did not have any trouble with his pace or his delivery as mentioned by some other reviewers.

not sure how anyone would not love this book. all the unsung heroes of the world. even if he had a darker side. must read if u like history and WW2 books. reads like a novel. i got a free copy of this book

A story with twists and turns. Eddie Chapman lived an exciting life. The author keeps you hooked from the first page.

the reality of this era

it was very very interesting book Eddi was a very interesting character and I think that in his situation he was very strong and very brave man. the story was written very well and the narrator was good enough it was an interesting listen and another piece of History of the most horrible time in the world

I found this a very interesting book because I really enjoyed the history side of it and was looking forward to the 007 stories. I have to admit it was a little hard for me to get through at times mainly because I felt it read more like a paper then a book so I would find myself not paying attention to the story and having to go back and re-listen. The narration was a bit slow at times too, which didn't help to keeping me actively listening. I probably should have bumped the speed up a bit but didn't think about until after I finished it. Overall, I did like it and found it very interesting but I do wish it was a bit more engaging like his Anti-Hero book. It does have some more mature content (no sex scenes) but it does to into his philandering and womanizing. I would recommend high school and up level read.

I was given a free copy of this book for a honest review.

This book reads more like a research paper. It has lots of names and dates, and no dramatization.

The first chapter rambles a bit, and the author tends to read into motivation a little more than I think was needed, especially in the early portions when the book reiterates about four times that Eddie was not a hero or villain proper.

The story of Eddie is interesting, and certainly worth the listen. I did find the narrator to speak a little slow, so I listened to it on 1.25 and had no issues.

Eddy Chapman was Germany’s first British spy during WWII, but as it turns out, his loyalty was to Britain.

Eddy was skilled with explosives, wireless communications, codes, parachuting, and oh, did I forget to mention, bank robbery?

With keen intelligence and a tremendous sense of adventure, combined with an innovative optimism and winsome personality, Eddy Chapman’s story is nothing short of legendary, complete with a James Bond type charm with the ladies.

A Comprehensive Story of a Real Life Spy

Iron Spy was an interesting and satisfying listen. It was about the life of Eddie Chapman, aka Fritz, aka Zig Zag, a double agent during World War ll. It's not exactly the glammed up spy stories we see on television. It's the truth of a man who started out as a petty criminal and turned into the greatest double in the war. This was an overall well-written book.

The narration by Guy Mott was very well done. He had a nice tone and gave a quality performance.

I was given a free copy of this audiobook at my own request, and voluntarily leave this review.

The book is the story of a man’s life from birth to death. There is very little detail of the spying activities with more emphasis on Jack’s personal life of crime and promiscuity.
His achievements in espionage where marvellous for its day but there is little dialogue to understand why.
A shame really.