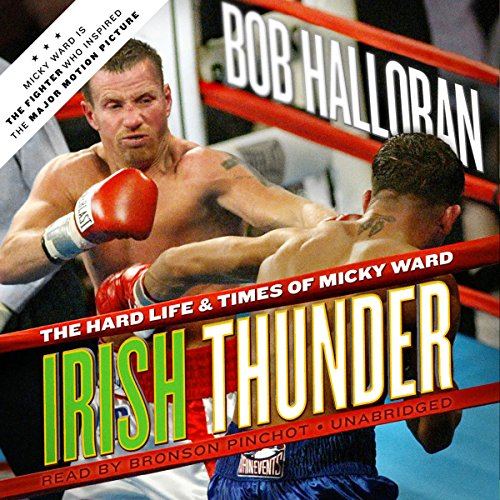 If you’re not a fan of boxing, you might never even consider listening to Irish Thunder, the nonfiction account of boxer Micky Ward that inspired the Academy Award-nominated film The Fighter. And that would be a mistake, because  even for listeners who’ve never watched a match in their lives  the volatile history of Ward, his family, and his career is a timeless and entertaining sports story brought to life by narrator Bronson Pinchot.

Ward  known to his fans as “Irish Micky Ward”  grew up boxing in Lowell, Massachusetts, a wrong-side-of-the-tracks town that claimed many of its youth (including Ward’s brother, Dicky Ecklund) for drugs, alcohol, and jail time. For nearly two decades, Ward’s career was a roller coaster of incredible wins and crushing defeats, culminating in a sport-changing trio of matches against Arturo Gatti in 2002 and 2003. Author Bob Halloran, a Boston-based sports anchor, addresses every detail of the influences and events that shaped Micky’s career, from the number of punches thrown and landed in each match and the color of the trim on the fighters’ uniforms to the interpersonal conflicts that plagued Ward’s team and family and the driving emotional forces that kept him entering the ring round after round.

Actor Bronson Pinchot may be best-known for his role as Balki Bartokomous on the sitcom Perfect Strangers, but there’s no trace of his Mypos accent here: He brings Micky, Dicky, and their families and friends to life with a rich tone and neat inflection. Micky is tough, determined, and resolute  and, in his lowest moments, Pinchot lets through just enough emotion to show the cracks in that resolve. The narrator handily navigates 10 hours of boxing talk, reading the fight scenes’ punches, jabs, cuts, and yells at a pace that expresses the intensity of the situation without losing the listener. The end result: You don’t have to like  or even understand  the sport to be taken in by the highs and lows of life in the ring with Micky Ward. BlytheCopeland

Micky Ward is THE FIGHTER that inspired the major motion picture.

Welcome to Lowell, where anything can happen.

Rocky Marciano fought at the Auditorium in 1947. Mike Tyson fought there in his Golden Gloves days. Sugar Ray Leonard won there, as did Marvin Hagler. Each of them prepared for his battle downstairs in the boiler room, just like thousands of other kids.

“Irish” Micky Ward grew up in the 1970s and ’80s as a tough kid from Lowell, Massachusetts - a town where boxers were once bred as a means of survival. A hard worker who overcame bad luck, bad management, and chronic pain in his hands, he avoided the pitfall of poverty and dead-end work that plagued Lowell to become a Golden Gloves junior welterweight.

Ward participated in street fights from an early age and was forever known by his opponents and spectators as the underdog. But with his incredible ability to suddenly drop an opponent late in a fight with his trademark left hook, he kept proving everyone wrong.

After fifteen years of boxing, a string of defeats, and three years of retirement, Micky battled Arturo Gatti in 2002 in the battle that was later named “Fight of the Year” by Ring magazine and dubbed “Fight of the Century” by boxing writers and fans across the country. Ten rounds of brutal action ended with Micky winning by decision, and reviving enthusiasm for a sport that had been weighted down by years of showboating and corruption. ESPN and Boston television reporter Bob Halloran recounts Micky’s rise to hero status, his rivalry with his imprisoned brother, and the negotiations, betrayals, and drugs that ultimately shaped a wild youth into a nationally respected boxer.

“Bob Halloran does a remarkable job in describing the actual key bouts of Lowell’s champion boxer. You can almost feel the punches and intensity of the brutal sport.” ( Sun; Lowell, Massachusetts)

What listeners say about Irish Thunder

What a terrific story. Being from Massachusetts and living in Lowell as a kid, this book really hit home with me. Mickey Ward embraced his tough surroundings and through faith and sheer determination he literally fought his way to the top! While never forgetting his friends, his family, and where he came from. I would recommend this book to anyone. Bronson Pinchot is terrific as well.

YES. Well written and the narration was fabulous.

Micky, of course. He overcame so many challenges, difficulties, and unfair life circumstances to succeed.

I wanted to because it was so interesting and exciting. I listened as I had time and often just drove off to run long errands so I could listen.

The first half of the book was a little hard going as the narrator was quite staccato, however he improved in the second half. If you're a boxing fan this is a must. Great true story

'Irish' Micky ward was not blessed with an easy upbringing, but was born with an incredible heart and determination. When micky wasn't paving the streets of his crummy hometown Lowell, he was in a boxing ring giving his all.

This book documents the highs and lows micky experienced throughout his boxing career and also covers his turbulent relationship with his infamous brother and trainer dicky ekland.

Despite micky's patchy record, and his reputation of being a journeyman he was feared and threw a vicious left hook to the body that helped him win many of his fights.

This book is a must read for any boxing fan, but micky's story also acts as a motivational tale that shows what determination and courage can achieve for anyone in any walk of life.

The narrator was maybe a little subdued at the beginning, but as the story went on he became more animated, he especially enjoyed reading and acting the ward v. gatti trilogy. Who wouldn't?