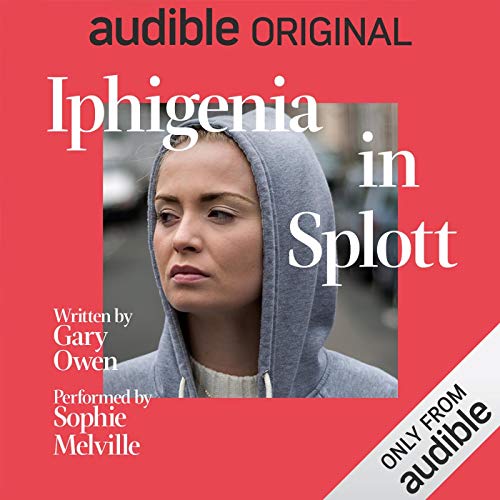 Drunk, dazed, disoriented, and stumbling down Clifton Street at 11:30 a.m., Effie is the kind of girl you’d likely avoid eye contact with while silently labeling a drifter or a delinquent. You’d probably pass judgment, assuming you know her - but you don’t know the half of it. As Effie’s life spirals through a mess of excess, drama, and addiction plaguing her at every turn, she has nothing to look forward to but a hangover worse than death itself each morning. Until one night gives her the chance to become something more.

In this powerful new adaptation of the enduring Greek myth of the ill-fated Iphigenia, playwright Gary Owen, director Rachel O’Riordan, and actress Sophie Melville (who received a Drama Desk nomination for her stunning, furious solo performance) construct a modern day probe into the ostracized corners of society—and those who live there, victims of our own negligence. A New York Times Critic’s Pick that received both the James Tait Black Award and UK Theatre Award for Best New Play, Iphigenia in Splott was first produced by Sherman Theatre, Cardiff, UK. The Stage raves, "…Rachel O’Riordan captures the play’s many tonal changes in her production, which is fluid and textured."

"Rachel O’Riordan captures the play’s many tonal changes in her production, which is fluid and textured." (The Stage)

What listeners say about Iphigenia in Splott

Iphigenia moves from Aulis to Splott

If you listen to nothing else, listen to this play. Very raw. Very real. It brings into focus, with painful clarity, what it means to be sacrificed "for the good of the State".

Iphigenia in Splott, what an absolute triumph! Sophie Melville delivers the kind of performance that just defies description in Gary Owen's powerful play. Effie is a character that at first seems to lack any kind of redeeming feature and make no mistake if you don't like swearing you are going to have a difficult time with her. Check out the samples provided before downloading to get a fair idea of what to expect.

Effie's a product of a country where we've lost all true sense of value sacrificing what's truly important on an altar of corporate greed. Where basic services are valued lower than profit and fat cat bonuses.

Once you get past her rough exterior you notice that underneath there is a kind of nobility about Effie as she gets dragged down by a world that doesn't have the time or resources to care. This really is a play for our times and Melville's performance is as good as anything I have ever heard on Audible! It sent shivers down my spine, revolted me, enthralled me and in no small measure moved me.

This is rough, hard-edged and challenged me to think yet again about how skewed our value system has become!

Footnote: The play only lasts about an hour and twenty minutes with the last half an hour or so being an additional feature; interviews with Owen and Melville. Still interesting but means the play might come to a halt quicker than you might have imagined.

You hate then love Effy in this marvelous re-telling of a torrid Greek take. Capricious god's and wild heroines are alive and kicking in Wales.

I wasn't sure about this at initially but I am so glad that I took the time to listen. A truly well considered, empathetic and compassionate view of a character that most would write off. We all rise and fall based on the expectations placed on us by society and our belief of whether we are deserving of love and compassion

When I listened to this, I was driving. At first, I detested the protagonist. I wanted to turn it off. but I couldn't. I'm glad I was driving. Annoying as she was, I couldn't help but connect with Iphi. Well done.

absolutely amazing performance!!
my favourite Audible book in many years.
I was captivated from start to finish.

brilliant monologue that i couldnt stop listening to till the end. Fantastic performer. Just hooked you in and made every word believable.

One of the best things I have ever listened to

An amazing story and performance. So glad I went back to it after deciding it wasn’t for me in the first ten minutes. Having nothing better to do, I listened to the interviews and decided to give it another go. It was one of the best decisions I have ever made!

Amazing, could not stop listening

I listened to the whole play in one go even after getting home in the middle of the night from a long haul flight. It was utterly gripping. I’m from Wales and the feel of Effie, her Nan, her boyfriend was perfection - she reminded me of people I knew. The story is wonderful and the interviews with playwright and actress also added to the overall enjoyment of the piece.

Hope to see this play live. The girl Sophie melville is outstanding.
Felt every emotion, pictured every scene as if I was there with her. Very well written and read. Thankyou.

Greek, but Welsh. But more universal than that...

I had no clue what to expect. I’ve never read the classics, couldn’t even tell you why I chose to download this play. But I’m extremely glad I did. It’s clearly a very contemporary take on an ancient theme, and written with such poigniancy that the actor’s personality and message are delivered with a clarity and power that it’s impossible to hate her. Impossible not to empathise, in the end. Fantastic performance. Obnoxious character. Terrifying reality. Vivid reality. Well worth a listen.