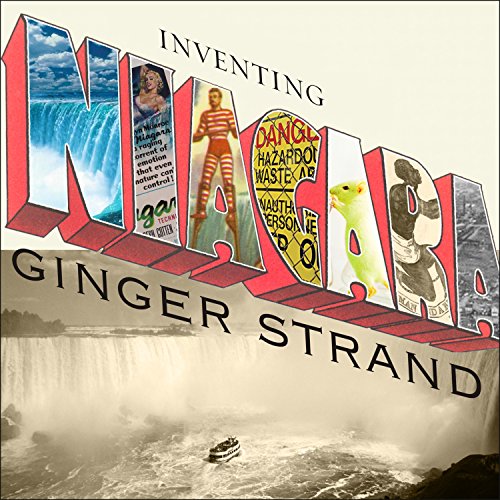 Americans call Niagara Falls a natural wonder, but the falls aren't very natural anymore. In fact, they are a study in artifice. Water diverted, riverbed reshaped, brink stabilized, and landscape redesigned, the falls are more a monument to man's meddling than to nature's strength. Held up as an example of something real, they are hemmed in with fakery - waxworks, haunted houses, IMAX films, and ersatz Indian tales.

A symbol of American manifest destiny, they are shared politely with Canada. Emblematic of nature's power, they are completely human-controlled. An archetype of natural beauty, the falls belie an ugly environmental legacy still bubbling up from below. On every level, Niagara Falls is a monument to how America falsifies nature, reshaping its contours and redirecting its force while claiming to submit to its will.

Combining history, reportage, and personal narrative, Inventing Niagara traces Niagara's journey from sublime icon to engineering marvel to camp spectacle. Along the way, Ginger Strand uncovers the hidden history of America's waterfall: the Mohawk chief who wrested the falls from his adopted tribe, the revered town father who secretly assisted slave catchers, the wartime workers who unknowingly helped build the atomic bomb, and the building contractor who bought and sold a pharaoh.

With an uncanny ability to zero in on the buried truth, Strand introduces us to underwater dams, freaks of nature, mythical maidens, and 280,000 radioactive mice buried at Niagara.

From LaSalle to Lincoln to Los Alamos, Mohawks to Marilyn, Niagara's story is America's story, a tale of dreams founded on the mastery of nature. At a time of increasing environmental crisis, Inventing Niagara shows us how understanding the cultural history of nature might help us to rethink our place in it today.

"Strand's provocative and iconoclastic book says much about how America has dominated nature, despoiled it and shrouded the offense in myth." (Publishers Weekly)
"Niagara Falls is still a place worthy of obsession." (The Washington Post's Book World)

What listeners say about Inventing Niagara

Works on All Levels

This is a great listen if you like history, trivia, stories, interesting characters and good narration.

I enjoyed this book on all levels and I highly recommend it. At first, I wasn't sure I was going to like it but after the first few minutes I was hooked. It's very well written and very well narrated---and it avoids cuteness. Inventing Niagara is a great slice of Americana. Go for it.

Would you consider the audio edition of Inventing Niagara to be better than the print version?

What other book might you compare Inventing Niagara to and why?

Reminds me of the writings by Mary Roach (i.e. Packing for Mars).

A tongue and cheek exploration through the sometime jaded sometimes glorious Niagara Falls.