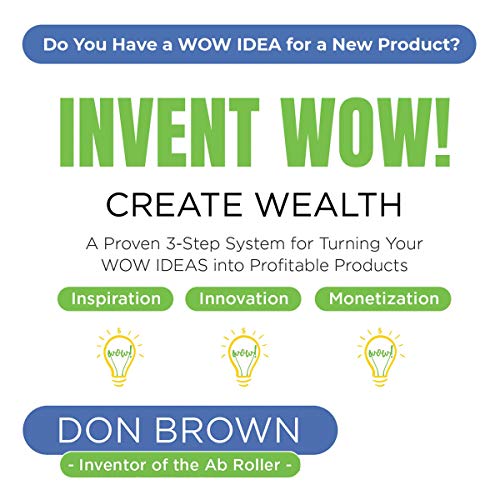 When I was growing up, I always thought there were only two ways to get rich. Number one: You were born rich. Number two: Some family member left you a bunch of money when they kicked the bucket. As much as people love to talk up the American dream, I grew up inside the American reality - raised inside a trailer in New Jersey, born to a 14-year-old mother.

But now, things are a little different. I've done lots of cool things with my life, but most people know me as "the ab roller guy". There's one now in nearly every garage, basement, weight room, and exercise facility around the world.

It was a journey from being a butcher, working for low wages at a gym, making the invention that would change my life to finding a path to freedom and stability. Today, I'm sharing that path with anybody struggling with money, curious about the world, or looking to take themselves to the next level.

It's called Invent Wow. Inside this book, I share my story and my tactics for reaching the top of the invention world. You don't have to be a Leonardo DaVinci to be a good inventor, and no, everything hasn't "been invented already". You won't just learn about the business end of inventing. I'll also share with you the exact methods that allow me to have better ideas with blockbuster value, years ahead of my competitors.

Here's what you'll find in the audiobook:

It's not just the story of my own success. It's about me helping you tell your own story. You'll also discover:

Every phase, from inspiration to profit, is covered in Invent Wow. I'll also give you reflection questions and activities for every step along the way so that you're not just listening about how to invent, but you're growing an inventor's brain, too.

So, don't take a moment to delay. Click the "buy now" button at the top of this page and buy Invent Wow.

What listeners say about Invent Wow

Anyone who needs an inspirational, actual American dream story to help themselves keep fighting the battle against the rat race

Anyone with the desire to make tomorrow better than today for themselves and the people they love will benefit from this book. Any person with an idea they would like to bring to the market should have this book for reference.