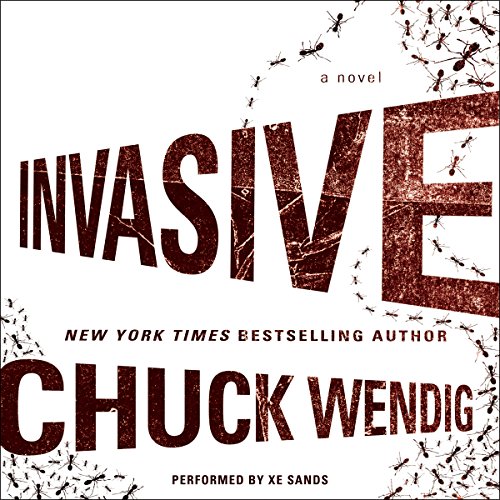 "Think Thomas Harris, Will Graham and Clarice Starling rolled into one and pitched on the knife's edge of a scenario that makes Jurassic Park look like a carnival ride. Another rip-roaring, deeply paranoid thriller about the reasons to fear the future." (Kirkus Reviews, starred review)

Hannah Stander is a consultant for the FBI - a futurist who helps the agency with cases that feature demonstrations of bleeding-edge technology. It's her job to help them identify unforeseen threats: hackers, AIs, genetic modification, anything that in the wrong hands could harm the homeland.

Hannah is in an airport, waiting to board a flight home to see her family, when she receives a call from Agent Hollis Copper. "I've got a cabin full of over a thousand dead bodies," he tells her. Whether those bodies are all human, he doesn't say.

What Hannah finds is a horrifying murder that points to the impossible - someone weaponizing the natural world in a most unnatural way. Discovering who - and why - will take her on a terrifying chase from the Arizona deserts to the secret island laboratory of a billionaire inventor/philanthropist. Hannah knows there are a million ways the world can end, but she just might be facing one she could never have predicted - a new threat both ancient and cutting-edge that could wipe humanity off the earth.

The story was amazing and I will definitely read everything Chuck writes! But the narrator took me out of the story sometimes because all of the make characters with the exception of Einar had the same voice and accent. Einar only differed by the accent. But the story was gripping and distraction was temporary. Would definitely recommend!

I could practically taste the fear and danger

Note: Even though this is Book 2 in the series, it works just fine as a stand-alone.

This is my new favorite creepy crawlies book. Such delicious suspension and that near neurotic fake feel of something crawling on you! Hannah Stander is a very interesting character. In fact, she may be my new favorite action hero. As a consultant for the FBI and a futurist (someone who studies cutting-edge tech and what that could mean for humanity), she's been called in by her friend Agent Hollis Cooper to check out a very odd death. Dead ants litter the scene which includes one dead and disfigured human. This launches Hannah into a world of bio-engineered insects, the creepy brainchild of billionaire Einar Geirsson. He keeps his weird and potentially deadly insects on an isolated island that is part of Hawaii. Is he truly a philanthropist, as all the hype claims, or does he have a more sinister motivation? I loved that this character kept me guessing until near the end.

I loved the suspense of this book. From the beginning, I could practically taste the fear and danger my favorite characters were in. Hannah's unique upbringing gives her skills to deal with this potentially world-wide disaster that she stands on the cusp of. However, she has plenty of mixed feelings about that upbringing, her parents being Preppers and their household rather isolated from the rest of the world. While this skill set serves her well, I could see that it cost her something to call upon those reluctantly hard-earned abilities.

Now I like my bugs a lot. I have a healthy respect for them and when possible, I will save them from peril by simply putting them outside. So I reveled in the all the bug descriptions and the various kinds of insects that had cameos. I especially loved the side character Ez Choi, an entomologist and good friend to Hannah. She's got brains and snark and a deep fascination with denizens of the insect world.

As all that build up promised, the bug outbreak was full of danger and death. The insects are single-minded in their pursuit of life and it took a mastermind to engineer them. Alas, the bugs aren't the only thing Hannah has to worry about. There's plenty of human foes as well and I was mightily pleased to see that they had a variety of motivations for their actions. More than once I did worry that Hannah wouldn't make it out of this tale alive. So many pitfalls! I was on the edge of my seat for the entire second half of the book. Excellent read with a satisfying ending!

Narration: Xe Sands was such a great fit for this story. Her narration was spot on. I loved her voice for Hannah, especially when her complicated feelings towards her parents came into play. All of Sands character voices were distinct and her male voices were believable. There we no technical issues with the recording. Plenty of accents (Scandinavian, Philippino, Hawaiian, etc.) came into play in this tale and Sands pulled them all off with skill.

Audiobook was purchased for review by ABR.

Loved this story, filled with realistic science horrors!
Swarming ants in your pants and eating your skin off, ekk!

Not recommended for nighttime light reading..

Where does Invasive rank among all the audiobooks you’ve listened to so far?

Invasive definitely isn't the best audiobook I've listened to, but it's a solid thriller. The third act sort of drags on, but it held my interest even listening to it in a single 16 hour road trip session.

The descriptions were extremely detailed.

Did Xe Sands do a good job differentiating all the characters? How?

In general, she did, but many of the male characters were hard to tell apart. I found that there were a number of sections that ended in a mumble that I couldn't quite understand.

It's extremely gory, but not gratuitously.

Once I started, I couldn't put it down. What a great adventure and a good look at our future as well.

Would you listen to Invasive again? Why?

Yes. Compelling, well paced story, but largest reason I would listen to it again is Xe Sands does a phenomenal job narrating the story. Felt like sitting around a campfire listening to someone tell a tale of legend and years gone by.

Ez Choi. For a somewhat minor character she had a lot of depth, seemed very real.

When Ez Choi is attacked in her lab. I liked the idea of the lab 'villan' the OBT being her savior.

Must have audio book. This book would be a great read for anyone. But, it was made even better through the narration of Xe Sands. Perfect pairing of art and performer. She took the already compelling story and characters to another level.

my first of this authors books, an interesting perspective on the science of genetic manipulation and it's bearing on the future. protagonist is well sculpted and it's easy to care about the her outcome. the resolution is satisfying and has the feel of cold reality. recommended!

(3.5 stars) Another exciting mix of science fiction with thriller, near future and fast-paced. Wendig does a nice job with a female POV character, enough detail to maker her interesting and well-rounded. He shirks a bit with supporting characters, but the nature of the book makes such short-comings minor. In short, well-written entertainment with enough intelligence to keep a reader engrossed.

This is a good story, if a little formulaic. I liked that the hero is a level headed woman. The genetically engineered insect as villainous weapon is great. The ants are even named appropriately! There are some serious plot holes, where normal suspension of disbelief is untenable. Like most of these stories, it always goes 3 chapters too long, with more action following what should have been the conclusion. And there is a lot of filler (how many times do we need to know that the characters ate protein bars made of crickets? And why are they constantly eating? And where are they going to the bathroom?) This reminded me of some of Lincoln Childs and Douglas Preston's earlier books, in a good way. I would listen to another of this woman's adventures.

The narrator ruined this for me

The narrator sounded so weak, swallowing the ends of the words, almost bored. Maybe she was trying to sound jaded and hard? but failing. Not at all matching the fire of the protagonist. It sounded like a fun story; I wouldn't know. Couldn't finish.

Not bad, but not my favorite

If you want to know 36 ways to describe a body without skin on it, this is the book for you. If not, maybe give this one a pass.

The plot was engaging. The characters were pretty 3D. The main character was interesting and well developed, and though I was pulling for her to win, I never felt a strong emotional connection to her. Not sure if it's the format, the performance, or the writing itself at fault.

This book is very gory, and frankly, just not my style, though I do enjoy reading the author's blog, which is why I picked up this book to begin with.

Chuck Wendig has struck entomological gold here. Lock in and listen to this excellent scifi thriller that will make you want to pay more attention to those little critters around you. Wendig has a unique writing style in that the story is first person perspective written in third person language. Xe Sands does an excellent job reading the story and I'm now going to look for more by her thanks to discovering her voice and style with this book. I'll admit I have a large biased for stories with genetics and you throw in insects and you've got me hooked. BUT if you get too much science wrong I'll not enjoy the story. So when I say this was fun from beginning to end, know that the science presented is researched enough to make it plausible and enjoyable. As for the story, well Wendig is really good at drawing you in and taking you on a ride. I won't give away anything, because I think it's best to jump in a discover it on your own. I will say if you have read Zer0es you'll enjoy the cameos, but this book can stand all on its own for anyone who hasn't read anything by the author before.

So yes, well worth the credit and time! Enjoy!!!