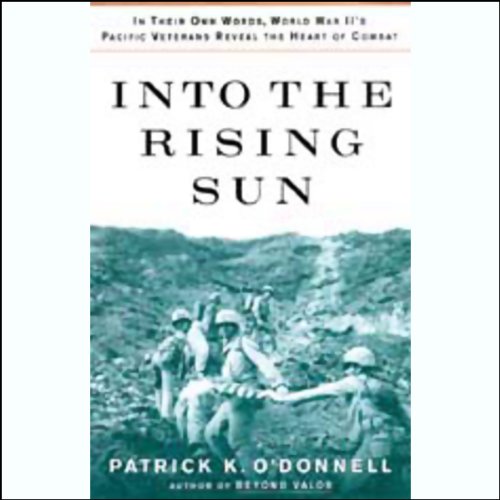 Into the Rising Sun

Patrick K. O'Donnell has made a career of uncovering the hidden history of World War II by tracking down and interviewing its most elite troops: the Rangers, Airborne, Marines, and First Special Service Force, forerunners to Americas's Special Forces.

These veterans were often the first in and the last out of every conflict, from Guadalcanal and Burma to the Philippines and the black sands of Iwo Jima. They faced a cruel enemy willing to try anything, including kamikaze flights and human-guided torpedoes. As O'Donnell explains in the introduction, most of the men in this book were at first reticent to talk. Over the course of the war, they had spearheaded D-Day-sized beach assaults, encountered cannibalism, suffered friendly-fire incidents, and endured torture as prisoners of war. Heroes among heroes, they include many recipients of the Navy Cross, the Distinguished Service Cross, the Silver Star, and other medals of battlefield valor, but none bragged about it. As one soldier put it, "When somebody gets decorated, it's because a lot of other men died."

By telling their stories, these men present an unvarnished look at the war on the ground, a final gift from aging warriors who have already given so much. Only with such accounts can the true horror of the war in the Pacific be fully known.

"Those seeking the uncensored truth and a dose of military history will not be disappointed." (AudioFile)
"A superior addition to World War II oral archives." (Booklist)
"Succinct historical narratives help set the stage for these eyewitness accounts....This important work preserves these veterans' shocking and moving stories for generations to come." (Library Journal)

What listeners say about Into the Rising Sun

Another reviewer was correct; the stories from the vets were amazing, but the somewhat long-winded overviews at the beginnnings of the chapters were often said again later, word for word. Add to that the narrator's monotone, constant mispronunciation of the word "corpsman" (hint: it's CORE-man) and some sloppy editing and you've got something that detracts from otherwise excellent source material: the stories of the vets themselves.

Overall, I found it worth listening to, but not a great audio production. 3 stars.

World War II in the Pacific up close

This books gives a view of World War II in first hand accounts stitched together by a narrative that puts the events in the larger context. It is realistic, wrenching and full of every day as well as extraordinary heroics that rangers, marines, paratroopers and others in the front line brought to the war in the Pacific. It is read in the same matter-of-fact tone that the people telling the events seemed to have. Hearing it makes it even more effective because it's like the you are hearing the men themselves tell their stories. A great audiobook.

Great idea - terribly executed. It is very repetitive covering the same ground two and sometimes three times. Also the intro says it is for Audible kids - the graphic descriptions of events within the stories being told by veterans is NOT something kids should be hearing in this way.

I really wanted to enjoy this book, but each anecdote started with the narrator describing what the eyewitness was going to say. Then the story from the veteran. You have to listen to the same story, twice. This is fine for people with very short attention spans but if you're going to pay attention to your audiobook, this is not a title for you.

“You can’t handle the truth.” That is the way I felt reading this book. It is a very hard listen! These former WWII soldiers finally, towards the ends of their lives, open up some very personal feelings about what happened in the South Pacific at that time. It was not pretty. In fact, it was down right ugly. War is hell, there is nothing else that can be said. The only redeeming factor was the great love these soldiers had for one another, and often, the tender feelings they had for their enemies. But it was kill or be killed, and these survivors chose to kill. What a choice!

The narrator sounds like he is gargling with gravel. Very distracting, Just wished they would have actual stories read by the story tellers.

Hard to accept the reality of war

Hard listening to the reality of war that so many have lived through. Important for our future peace.

A wonderful presentation of oral histories from the men that fought the war in the Pacific.

I was looking forward to this book, i am a fan of oral histories as well as WWII. This just missed the mark.