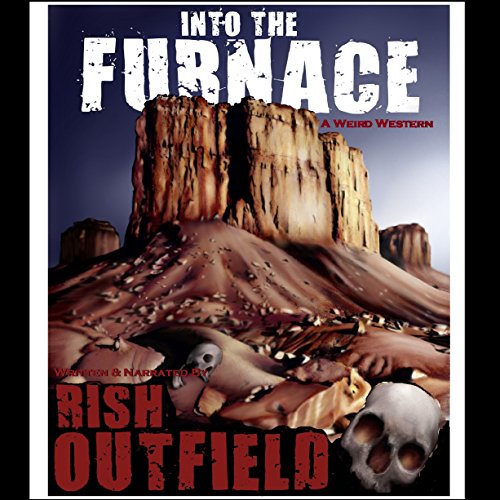 Into the Furnace is a western, with horror/fantasy elements. After losing his wife back in Oklahoma, Sheriff Will Ford takes his daughter west to Bendo's Furnace, New Mexico, taking over for the previous sheriff, who disappeared. When he gets there, Will discovers that a great many of the town's residents have fled or vanished, leaving no trace and few clues. It turns out not to be Indians, as Will initially suspected, but something far stranger. Also includes an Author's Note.

What listeners say about Into the Furnace

Weird West with a twist

This seems like a weird west story, but there is a twist that makes it something else. The story is fun, light and entertaining. Bu the selling point is Rish's narration. He is one of the best in the field, with a versatility and range to his voice that is nearly unmatched. Get anything that he has narrated, or subscribe to his fiction podcast, The Dunsteef, and be amazed.

I was very excited that Rish had a book out, so I purchased it as soon as I heard, and I was not disappointed. It is a great, fast paced story that anyone interested in westerns or fantasy will be sure to enjoy.

If you're a fan of Rish Outfield's short fiction you won't be disappointed by this, his first novel. If you're familiar with his voice acting then the high quality narration you've come to expect is here too. If you've been curious about his work but didn't want to spend a credit on something short, then this is a fitting introduction.

I can say with perfect honesty that I wasn't expecting the supernatural element, even after listening to the samples on his podcast. He managed to take something that comes from what one might call the opposite end of the fiction spectrum, but cleverly integrated it so that it is seamless. The result is a take on the Weird Western that is nothing if not memorable.

While the story would work well enough in text, Rish's talent at voicing characters is especially important here, I feel. If you are deciding between the text version and the version here on audible, do yourself a favor and listen to this one.