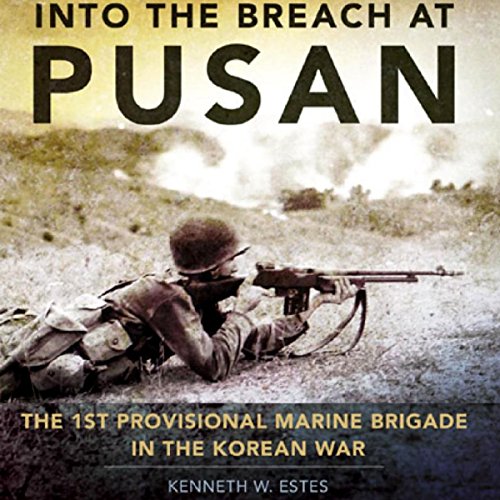 Into the Breach at Pusan: The 1st Provisional Marine Brigade in the Korean War

Into the Breach at Pusan: The 1st Provisional Marine Brigade in the Korean War

In the opening campaign of the Korean War, the First Provisional Marine Brigade participated in a massive effort by United States and South Korean forces in 1950 to turn back the North Korean invasion of the Republic of Korea. The brigade's actions loom large in marine lore. According to most accounts, traditional Marine Corps discipline, training, and fighting spirit saved the day as the marines rescued an unprepared US Eighth Army, which had been pushed back to the "Pusan Perimeter" at the southeastern tip of the Korean peninsula. Historian and retired marine Kenneth W. Estes undertakes a fresh investigation of the marines' and Eighth Army's fight for Pusan. Into the Breach at Pusan corrects discrepancies in earlier works (including the official histories) to offer a detailed account of the campaign and place it in historical context.

Estes describes the mobilization, organization, and operations of First Brigade during the first three months of American participation in the Korean War. Focusing on the battalions, companies, and platoons that faced the hardened soldiers of the North Korean army, he brings the listener directly to the battlefield. The story he reveals there, woven with the voices of soldiers and officers, is one of cooperation rather than interservice rivalry. At the same time, he clarifies differences in the organizational cultures of the US Army and the Marine Corps.

Into the Breach at Pusan is scrupulously fair to both the army and the marines. Estes sets the record straight in crediting the Eighth Army with saving itself during the Pusan Perimeter campaign, but he also affirms that the army's suffering would have been much greater without the crucial, timely performance of the First Provisional Marine Brigade.

The book was published by University of Oklahoma Press.

What listeners say about Into the Breach at Pusan: The 1st Provisional Marine Brigade in the Korean War

This writer seems to spend half his time talking down previous accounts of the battles of the Pusan Perimeter. Really very discouraging. can't finish, getting refund.

If you're expecting a book that downplays the role of the 1st Provisional Marine Brigade and minimizes its contribution, this is probably the book for you. The intent was to introduce some additional historical information into the account but I feel it does contradict the official Marine Corps history. I made it maybe 15% of the way through the book.

A good read for some

An important part of history, but author seemed to skip around just repeating historic facts