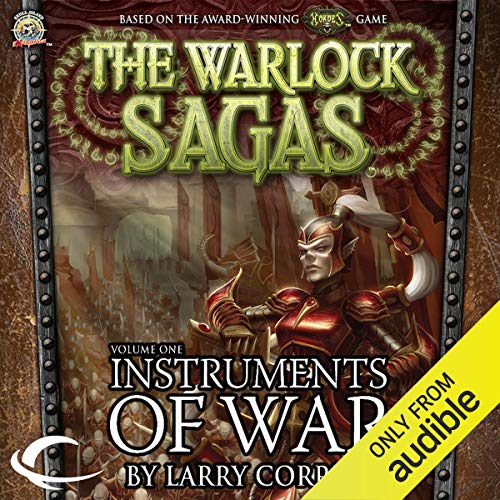 Makeda , Supreme Archdomina of House Balaash, is known throughout the Iron Kingdoms for her leadership of the mighty Skorne Empire, but it was not always so… Before the coming of the Skorne Empire into the west, Makeda was little more than the second child of a great house, but through her will, determination, and adherence to the code of hoksune, she rose above all others.

For the first time the secrets of both Makeda and her people are revealed in the tale of their epic struggle for honor and survival in Instruments of War. A novella of the Iron Kingdoms.

What listeners say about Instruments of War

Larry Correia is my favorite author, but this book isn't my cup of tea. That said, it is exciting, peppered with a bit of very dry humor, and vivid. The characters are consistent, and their motivations clear. I used to love this sword and sorcery kind of fantasy, but it's not my thing anymore. If you love the Monster Hunter series or the Grimnoir series (I have listened to them multiple times) this is nothing like them. I hate to be negative about my main man Correia, but the narrator wasn't awesome either. Her voice and delivery lacked vitality. I recommend the book if you are a fan of the genre or play Warmachine.

Better than I hoped

When it started I thought for sure the book would follow the same scattered storytelling format of "The Butcher of Khardov: The Warcaster Chronicles, Vol. Two." Luckily, Larry Correia kept the flash backs to a minimum and told a fairly epic story in a short time, glossing over un-necessary parts so that a quick, pulp-like story could be told.

I even found myself rooting for Makeda from time to time, which is hard since she is one of the bad guys in the Iron Kingdoms and comes from a despicable society.

Here's hoping a Trollblood-centric novel from the Hordes side of the Iron Kingdoms comes out and it is as well-written as this was. (Though a longer wouldn't be bad if the story needs it.) :)

Really fleshed out the backstory, flawlessly included abilities youd find in the game and helps make the game mechanics feel like they are coming from somewhere

Outstanding. Solid 5’s in every way. One of the best books I have ever had the pleasure of reading.

I have no idea what the Warmachine game stuff is all about that most of the other reviewers mentioned (apparently it's the universe this book originates from). I'm a fan of the author, though, and this book did not disappoint.

a solid piece of fluff for those in the fandom

the performer did a good job in all the technical aspects (clarity, character distinction, pacing, ect.), but she failed to convey emotion and intensity the characters should have had.

Great story, well written and portrayed characters, great use of the world. A good experience for fans of fantasy, steam punk, and pirates.

Solid understanding for the Skorne

Why not? fun and brief. Can't wait to hear more from this world.

What other book might you compare Instruments of War to and why?

Similar to the "into the storm" book. Not quiet steampunk while being fantasy.

Nothing in specific. Just a good clean narration, from what you would think was the protagonist's voice.

When the protagonist throws down the other tyrant. Very moving.

I'd love to see whole books set in this world.

I loved it, is very nice
a bit short though, is the other volume written by Larry, does it complete it?