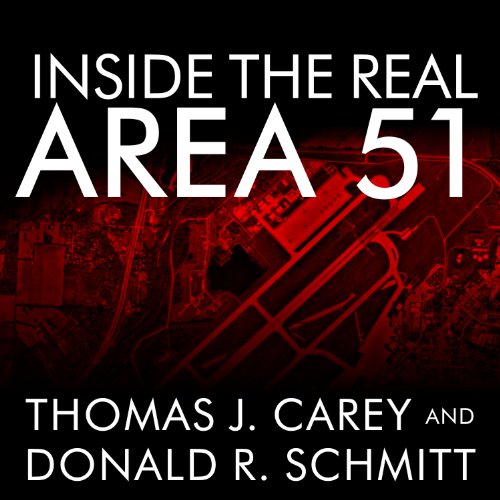 Inside the Real Area 51

Inside the Real Area 51

The true nature of what actually crashed in Roswell, New Mexico, in 1947 remains classified. Only a select few have ever had access to the truth about what became known as Area 51.

But what happened to the remnants of that crash is shrouded in even greater mystery. What began in the high desert of New Mexico ended at Wright-Patterson, an ultra top-secret Air Force base in Dayton, Ohio. The physical evidence of extraterrestrial visitation was buried deep within this nuclear stronghold.

How tragic that such seismic news should be kept from the people of the world... pieces of history, now quickly dwindling into oblivion as the last of the secret-keepers passes on.

In spite of its rich history of military service to our nation, Wright-Patterson also stands as the secret tomb of one of the greatest occurrences in recorded history. But be prepared... the real Area 51 - Wright-Patterson's vault - is about to be opened.

good listen, read very well, super interesting, wish it was longer, I've heard about wpafb and hangar 18 but didn't know there was this much story behind it

loved it and recomend it to those that believe in UFO'S. THIS BOOKDROPS THE NAMES OF THE ACTUAL PEOP.LE INVOLVED.

Same info hashed and rehashed over and over. So unimpressed. I returned the book at chapter 15.i just couldn't take hearing the same info repeatedly repeated. And the narrator did read the book in advance and sounds like a computer. He mispronounced many obvious words or phrases. Not impressed. And for the record I'm a believer. So it's not like I'm a bitchy skeptic. This book just sucks.

So much attention is given to Area 51 that people forget to learn about the real and public history of Wright-Patterson AFB. This book is interesting on many levels and much more focused on historical facts than speculation.

Narrated by a Robot

A better Narrator with a voice that was not monotone and sounds like an automated phone service.

What was most disappointing about Thomas Carey and Donald Schmitt ’s story?

I like the story, but writing is too detailed and hard to follow. How many times does the author have to blurt out the name history of Wright Patterson AFB? He gets lost in the minut details to the detriment of the story,

Who would you have cast as narrator instead of Paul Boehmer?

Yes. His drab voice gets in the way of the story,

The history of the cover-up is fascinated, as are the first hand stories.

Another good investigation, but all for nothing?

If you could sum up Inside the Real Area 51 in three words, what would they be?

Which character – as performed by Paul Boehmer – was your favorite?

LIke other seminal works on this subject in recent times, this book compiles further great evidence to any sharp observer, but what good is it to know? History has shown that the only way to reveal the core secrets held by any ruling power is by complete overthrow of the rulers, violently, as the people who used to be the "establishment", all of their families, friends, and associates are hunted down and brutally massacred. Nothing can open mouths and force people to divulge secrets as effectively as the threat of death and mutilation to them and/or their loved ones, or the total destruction of that which they hold most precious. Even if one day the entire U.S. government, down to the deepest classified units, were to be toppled, and every secret member of the current Establishment lineage and their families were lined up for execution at the edges of mass graves, where their only last minute choice to avoid their bloody fates is by divulging the secrets pertinent to the subject of UFOs, who could say that the overthrowers would not keep the secrets that they can successfully extract to themselves, just like the people they have overthrown had done?I don't have an army to destroy the entire government and forcibly smash open all of their secret vaults for the world to behold, and neither does any other reader, probably. So coming back full circle along my train of logic, even if I were the one who is able to force the director or commander in charge of hiding such information to divulge it all at the end of a gun barrel, who is to say that some of my underlings won't keep some secrets to themselves or persuade me to do the same? So, what good could it possibly do to have knowledge of this subject?

SO very interesting learning about this stuff. How can anyone suspect the existence of extraterrestrials? good listen!

I would re-record the narration for this audiobook! The narrator sounds almost robotic, and this is going to irritate me as I listen to it more!!!!

Would you be willing to try another one of Paul Boehmer’s performances?

ABSOLUTELY NOT! HIs performance on this book is awful.

Do you think Inside the Real Area 51 needs a follow-up book? Why or why not?