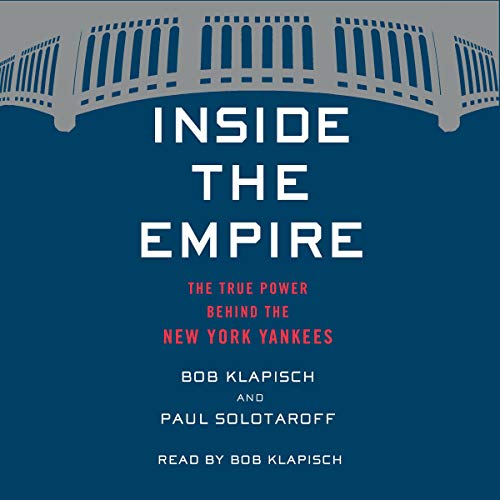 A riveting look at what is really said and done behind closed doors with the New York Yankees, the most famous and wealthiest sports franchise in the world.

Using the 2018 baseball season as the backdrop, Inside the Empire gives listeners the real, unvarnished “straight-from-the-gut” truth from Brian Cashman, Aaron Boone, Giancarlo Stanton, C.C. Sabathia - even Hal Steinbrenner and Randy Levine - and many more.

This is baseball’s version of HBO’s award-winning NFL series Hard Knocks. Klapisch and Solotaroff take you deep into the Yankees clubhouse, their dugout, and the front office and pull back the curtain so that every fan can see what really goes on.

Bottom line? You may think you know everything about the storied franchise of the New York Yankees and what makes them tick. But Inside the Empire will set the record straight, and drop bombshells about iconic figures along the way. There’s never been a baseball audiobook quite like it.

What listeners say about Inside the Empire

It's hard for me to not love a book about the Yankees but I didn't love this one. No real insight that you wouldn't get from the newspapers. And the narrator was probably the worst I've heard on Audible. He read with a monotone and has the annoying habit of saying quote and unquote at all times even when there was written he said or where it was abundantly clear who was speaking. A disappointment.

File this under fiction

Klapisch is a NY writer, so a little NY bias is to be expected, but this is fanboy garbage. Early on, he goes to great lengths to condemn Fenway Park and Rogers Centre in Toronto as hostile, vile places for visiting teams to play in. Which they sometimes can be, no doubt. But, uhh, dude...have you ever been to Yankee Stadium??? I assume you have, considering you’re a Yankees beat reporter. But apparently, you go there with rose-colored blinders on, because no stadium on earth is more vile and uncouth towards visiting ballplayers than that place. Yankee Stadium is where civility goes to die. And everything in the book is slanted like this. All the protagonists are lionized (Cashman, Boone, Stanton — presumably because they gave the authors access), while all-time greats like Torre, Girardi, and Jeter are incessantly pooped on as though their teams won in spite of them. Facts are cherry-picked to paint a skewed portrait of how the author wants the narrative to take shape. NEXT!

Fascinating look at the modern Yankees. I just wish it was read by another performer.