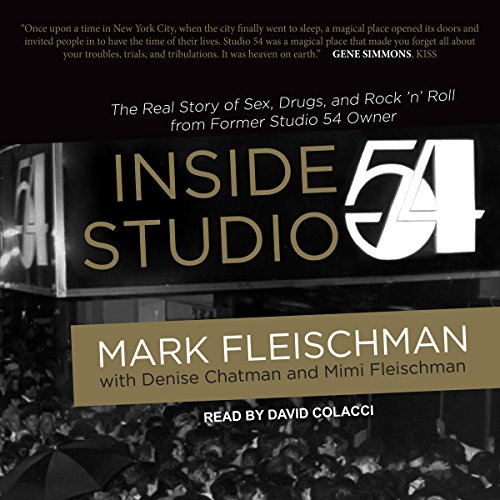 In Inside Studio 54, the former owner takes you behind the scenes of the most famous nightclub in the world, through the crowd, to a place where celebrities, friends, and the beautiful people sip champagne and share lines of cocaine using rolled-up 100-dollar bills.

In the early 80s, Mark Fleischman reopened Studio 54, the world's most glamorous and notorious nightclub, after it was closed down by the State of New York. Ten thousand people showed up that night, ready to restart the party that abruptly ended after the raid in 1978 landed its former owners in jail.

Inside Studio 54 invites you to revisit the happening scenes of the 1960s, '70s, and '80s, the post-Pill, pre-AIDS era of free love, consequence-free sex, and seemingly endless partying. Following Fleischman as he built connections as a hotel, restaurant, and club owner that lead him to Studio 54.

Inside Studio 54 takes the listener from Brazil to the heights of debauchery in the Virgin Islands and finally to New York City. A star-studded thrill ride through decadent and drug-fueled parties at the legendary Studio 54.

"Now, as then, [Fleischman is] an eager, garrulous host, gleefully sharing his love of the place, and the time, and the drugs" (NPR)

What listeners say about Inside Studio 54

To Experience the Studio Effect

Extraordinary book to read. I just watched The Halston Movie on Netflix. This made me inquisitive to know more about Studio 54 ..... Wow wow wow what read. I’m sure it was just a glimpse into nightclub of tribal dancing and activities. Love this book loved the narration. Great read

What could have been exciting reading turned out to be big big bore. The writing was so bad. I almost stopped listening but I stuck it out to the end hoping it would get better. It didn’t.

Stupid stories from an old man recounting the “good old times” and living in the past.

I never got to go. Now I feel like I have, if only a little.

I've heard of that there was a club called Studio 54 that was popular in New York, but I did not know that much more about it. Talk about sex, drugs, rock and roll/disco, this place at all. Mark did not hold back in his life story, from the beginning middle, and end. The narrator was to slow that I had to speed it up. He could of had me hanging onto every word, but he read without excitement. The stories are more enjoyable for me when read by the author.