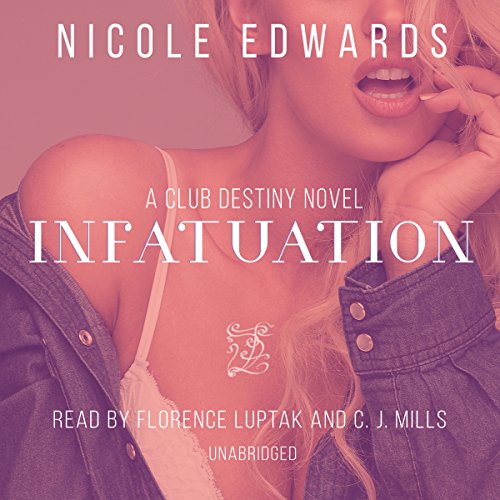 It only takes one encounter for McKenna to realize the heat the two of them generate together is hot enough to melt her internal thermostat. That doesn't stop her from requesting an exclusive on the club that might just turn into more than she bargained for.

Tag Murphy, a highly successful corporate attorney who represents some of Dallas' wealthiest companies, is not only Club Destiny's legal counsel - he's also a member. It's during his time in the public spotlight, representing the club in a volatile lawsuit against one of its former members, that Tag gets his first glimpse of a fiery redheaded journalist bent on exploiting his personal life for the benefit of her readers. In order to protect his own personal interest and that of the club he represents, Tag decides to take McKenna up on her offer, only he adds his own stipulations. If she wants to learn more about the club, she's going to get the guided tour... from him.

What listeners say about Infatuation

Great book can't wait to listen to the next book. I am in love with this authors books

I loved this book when I read it the 1st time so of course i had to get the audio version. I definitely fell in love w tag and makenna

According to this book, everyone would be happy as a pig in shit if only they spent all their free time & money in sex clubs getting screwed & whipped by total strangers.

McKenna writes about "sexual trends" and attorney Tag represents the owners of the sex club where he is a member. These 2 jaded adults miraculously fall madly in love while having sex with other partners, sex in public and for McKenna, being degraded for kicks.

It was hard imaging this couple with any type of future - will they still be hanging out in dungeons when they have children or get gray hair & wrinkles?