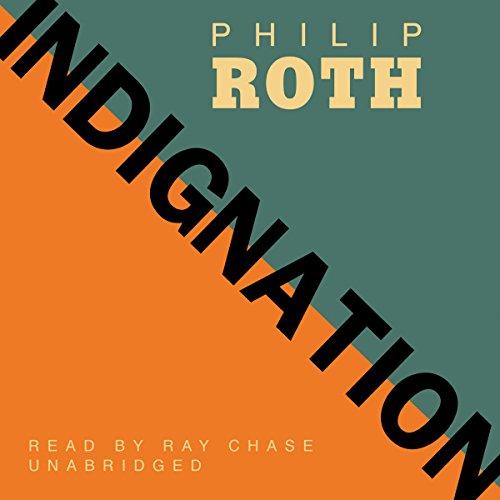 In 1951, the second year of the Korean War, a studious, law-abiding, and intense youngster from Newark, New Jersey, Marcus Messner, begins his sophomore year on the pastoral, conservative campus of Ohio's Winesburg College. And why is he there and not at a local college in Newark where he originally enrolled? Because his father, the sturdy, hardworking neighborhood butcher, seems to have gone mad - mad with fear and apprehension of the dangers of adult life, the dangers of the world, the dangers he sees on every corner for his beloved boy. Far from Newark, Marcus has to find his way amid the customs and constrictions of another American world.

Indignation, Philip Roth's 29th book, is a startling departure from the haunted narratives of old age and experience in Roth's recent books and a powerful exploration of a remarkable moment in American history.

What listeners say about Indignation

“Of a terrible, the incomprehensible way one's most banal, incidental, even comical choices archive the most disproportionate result.”
― Philip Roth, Indignation

There was a period when I hated Roth's small books. I loved his big, strong, hefty books. I thought DeLillo and Roth's novella periods were horrible indulgences; vanity projects meant to expel some small idea, some festering detail yet unexplored in their earlier masterpieces. A prose zit popping. I still think they are a bit indulgent and not as good as Roth and DeLillo's great works, but I guess as I get a bit older, I become less indignant of things that matter little, really.

Anyway, this novella moved up my list because several Roth books have recently been made into movies and this looked like one my wife and I would go to together. So, I brought home my small, beautiful, yet unread, autographed copy of Roth's 'Indignation'.

My wife read it first, and finished it. That was a good sign. She has a very low toleration for crap and where I MUST finish something, she has no problem abandoning a novel if it doesn't measure up to her minute-by-minute standards (this creates a bit of uncertainty in our marriage and keeps me on my toes). She felt it was a bit darker than she typically likes. Once, early in our marriage, my wife summarized my literary taste as "older white men with sexual issues". Obviously, reading Roth is bound to solidify that stereotype.

When I started reading the novel, I was tickled to find a bunch of not-so-subtle allusions to Sherwood Anderson's Winesburg, Ohio. Anderson's book of related short stories seems to have been an inspiration, or at least a harbinger of, of this later Roth novella. While I don't love this book as much as Anderson's book, I still enjoyed it (as much as one can enjoy a book about death, loneliness, isolation, rigidity, and indignation). It was tight, beautiful, and also strange and sad. IT was a Philip Roth novella.

Would you try another book from Philip Roth and/or Ray Chase?

Nope. I have been off Mr. Roth since Portnoy's Complaint, and this book reminds me of why I have neither read nor listened to anything of his for decades. He was remarkably immature when he wrote about masturbating into his family's dinner some forty years ago. In all this time, he has not grown up and out of his adolescent preoccupations. The semi-final scene in the book, which is set in a fictional town called Winesburg, Ohio, at the university there: the scene is actually a very large panty-raid by the male students! Panty raids? Are we still talking about shite like this in 2016?

Something very different from this.

Mr. Chase has very limited talents, a good match for the material, actually. He reads so fast that you can't keep up, and after a while you don't care to.

Could you see Indignation being made into a movie or a TV series? Who should the stars be?

It is already a wonderful movie. See it. The stars are Logan Lerman and Sarah Gadon. I had never heard of either, but they both are terrific. The movie is so much better than the book. It treats very complicated material with sensitivity. I won't spoil the plot for you, but I will say that these two young people fall in love very quickly at the ridiculously repressive University of Winesburg. The Dean of Men is a great villain: a self-righteous, bullying, intrusive, Jew-baiting, hyper-Christian who interrogates Marcus Messner as if he were already proven guilty of rape and other crimes against humanity. Sarah Gadon is a match for Lerman. Portraying a tormented young woman who, uh, surprises Marcus on their first date, she is utterly true in every scene.

Pretty obvious how much I enjoyed this, eh? Don't waste your money on the book, when the movie is being reviewed by some as the best drama of the year.

In my opinion, Indignation is a unique “coming of age” story.

Typically, I would say that COA stories are a dime a dozen. However, Indignation, in Roth’s skilled hands, places the reader, and their sympathies, squarely in the mind of Marcus. You feel his outrage. You fume at the minor slights and outright injustices. As you near the end of the story you are consumed with righteous indignation and wait expectantly for justice to prevail.

Then Roth does something so unexpected that your world is rocked off its foundation. I won’t reveal what that is because I do not want to spoil it for anyone else.

What I will say is this is the truest “coming of age” story I’ve ever read. The problem with making the transition between child and adult is you never really understand that transition until you are much older and have some life experience to hone your perspective.

It’s not that youth is wasted on the young, but when you’re young you don’t, yet, have all the tools you’ll need to face the world.

Roth Does It Again

I love Roth, and this reader brought the humor and emotion in a great way

The Angst is infectious

It's remarkable how the Angst of the main character carries through to the end. He almost convinces you to join him

I'm glad I stuck through the end

I was having a hard time staying interested in the book and the story, and if I was reading on paper, I probably wouldn't have finished the book. I think listening on audio kept me interested enough to finish and I'm glad I did -- I found the last 25% or so of the book the most interesting part.

Tightly woven story. Typical Roth. A reminder that each age and era has its norms and mores.

The book is short, but does a great job of quickly bringing to life the characters and their attributes...both positive and negative. Author gives you thoughts to think about and reasons to like, love and forgive.

The title of the book brings to mind an insufferable dolt who snubs every disagreeable encounter one would face growing up Jewish and being sent off to a military academy. This book would be valuable to those who are challenged by the nuances of the English language, but not much more.

How Have I Missed This?

Having been a long time Roth fan I don't know how this book has escaped me.

This is a coming of age book about a young man out of his element and whose teenage angst and neurosis went beyond the pale when he left home to attend college in another part of the country.

At the beginning, one might find the pressures speech of the narrator. As the character develops it is apparent that this character thinks and expresses himself in this manner. The narration is perfect.

The book takes place in 1951, but globally and politically has much to say about our current time. Young readers will be surprised at the constant thoughts of young men regarding the draft into military service. Neurosis and all, this young man's thoughts and fears are those of young men across the country.

Other people’s weakness can destroy you

just as much as their strength can. Weak people are not harmless. Their weakness can be their strength."
Philip Roth, Indignation

An amazing little book, full of indignant rage at life's inequities, at the power of small events unravelling entire lives, Especially for the young and their certainty that they have got it.

A masterpiece of how to bring characters to life, with a complex multilayered plot that hides a parable for modern times, where morals and beliefs change faster than ever stripping all value of things we held as certainty or immutable.

A book that leaves you pondering at all the little injustices, that can set a cascade of events in motion that will change it all.

“what his uneducated father had been trying so hard to teach him all along: of the terrible, the incomprehensible way one’s most banal, incidental, even comical choices achieve the most disproportionate result.”
― Philip Roth, Indignation

I had never heard of Roth before audible suggested it to me. It recommended this book in between me working my way through Vonnegut and Bukowski, and I must say that, in my mind, this is exactly where Roth fits.

Not as crass and self destructive as Bukowski, a little more realism than Vonnegut, but just as talented and enjoyable as both of them.

The character era are believable and the story itself is a tragicomedy interesting and reminiscent of Chekhov in that it is sometimes the every day things in life that break us as human beings. Roth is a tremendous writer. So had to explain why so I won’t bother. Please listen to this...thanks. Vicki