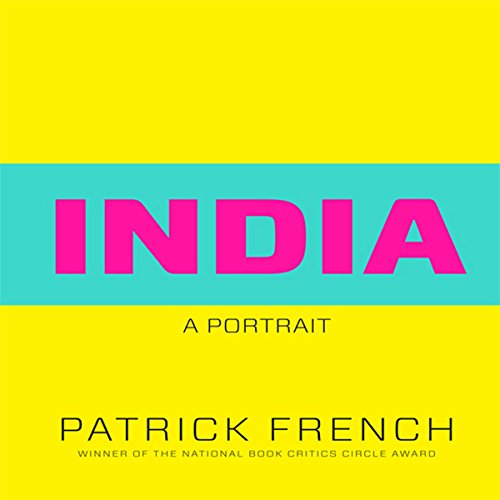 A monumental biography of the subcontinent from the award-winning author of The World Is What It Is: The Authorized Biography of V. S. Naipaul.

Second only to China in the magnitude of its economic miracle and second to none in its potential to shape the new century, India is fast undergoing one of the most momentous transformations the world has ever seen. In this dazzlingly panoramic book, Patrick French chronicles that epic change, telling human stories to explain a larger national narrative.

Melding on-the-ground reports with a deep knowledge of history, French exposes the cultural foundations of India’s political, economic and social complexities. He reveals how a nation identified with some of the most wretched poverty on earth has simultaneously developed an envied culture of entrepreneurship (here are stories like that of C. K. Ranganathan, who trudged the streets of Cuddalore in the 1980s selling sample packets of shampoo and now employs more than one thousand people). And even more remarkably, French shows how, despite the ancient and persistent traditions of caste, as well as a mind-boggling number of ethnicities and languages, India has nevertheless managed to cohere, evolving into the world’s largest democracy, largely fulfilling Jawaharlal Nehru’s dream of a secular liberal order.

French’s inquiry goes to the heart of all the puzzlements that modern India presents: Is this country actually rich or poor? Why has its Muslim population, the second largest on earth, resisted radicalization to such a considerable extent? Why do so many children of Indians who have succeeded in the West want to return “home,” despite never having lived in India? Will India become a natural ally of the West, a geostrategic counterweight to the illiberal rising powers China and Russia? To find the answers, French seeks out an astonishing range of characters: from Maoist revolutionaries to Mafia dons, from chained quarry laborers to self-made billionaires. And he delves into the personal lives of the political elite, including the Italian-born Sonia Gandhi, one of the most powerful women in the world.

With a familiarity and insight few Westerners could approach, Patrick French provides a vital corrective to the many outdated notions about a uniquely dynamic and consequential nation. His India is a thrilling revelation.

What listeners say about India

Highly engrossing audiobook that goes far in explaining how India became the country it is today from independence onwards. The author has done a wonderful job in bringing what could potentially be dry material (politics, economics) to life by using illustrative stories of individuals and events. It's a great book, often surprising and often quite disturbing and never boring. Highly recommend. I actually enjoyed the reader's performance contrary to some. Great book to listen to in small sections whilst commuting.

Mr. Dixon's poor pronunciation would be bad enough, but is made worse by his lazy reading. To pick one example from scores, the name of Bihar's capital is PAT-NA, and not PAN-TA. How hard can it be to get that right?

Would you listen to India again? Why?

Yes, The book is full of interesting information

What other book might you compare India to and why?

None, I have not come across a single book that covers the broad range of topics from the past and the modern day India.

The author does display an anglo-saxon bias in his portrayal of Sonia Gandhi.
His portrayal of Rahul Gandhi is not balanced. He says following very positive things about Rahul Gandhi without supporting it with any information
"He’s not sentimental, he has a clinical mind."
"he was trying to restructure the calcified organization of the Congress party"

"Rahul Gandhi was up against a cascade of privilege and entitlement that reached to the heart of Indian politics at the centre and at state level". I would say this applies to Rahul as well.

An Epic Book by Award-Winning Author

This epic portrait of India is a must for anyone who wants to understand one of the most amazing transformations in recent history. Patrick French does a great job of introducing the listener to a wide range of characters and presenting the political, economic and social complexities of one of the world's largest democracies.

This book is excellent for what it is.

One only wishes that audible had included the bigger, more important book by Mr. French to come out in recent years, namely his biography of V. S. Naipaul The World is What it is. It was a major publishing event and readily adaptable to audiobook. In general, audible seems uninterested in either the biography or the novels of Mr. Naipaul, who is by almost any critical account one of the most important writers in English in the last half century. Anyway, French's India book is enjoyable even for one, such as myself, who has traveled there many times and has read an immense amount on the subject of the country, its people, and its history.

I love history, particularly about a country that I don't know much about. This book left me still not well informed about India. It was poorly put together and I thought the narration was poor.

This was a very thought provoking book. I learned a lot about the make up of india's culture that I had not known. The diversity. I still don't understand how they have managed unity with such diversity.

India is such a complex and layered social system forged over many thousands of years. Now for the first time in its history it is united under a democracy that is beginning to decompose the very society that has existed for so long. This book tells the story of this epic event through a collection of interesting and often humorous stories

The narration is comfortable easy listening

Having lived in India for 3 years, I am beginning to see the complex way this unique country operates, and can respect the incredible amount of work that went into writing this book

Political and economic history of India

I was looking for the historical origin of India and its people. This book only mentioned history in one or two sentences. The balance of the book dealt with the politics, religions, caste system, corruption and economics. While well researched and equally well written it was not what I was looking for.

It could have benefitted from an outline

Where does India rank among all the audiobooks you’ve listened to so far?

Would you be willing to try another one of Walter Dixon’s performances?

I assume Walter Dixon would do a fine job with more familiar material. His voice is pleasant, but he uses inflections that seem rather rote. This doesn't work with a lot of the material in this book. Also, his mispronunciations of Indian names and phrases is irritating.

The book itself is a bit disorganized, with a fair amount of repetition and lack of timeline. The reader doesn't seem familiar with its content. Not great, but still, a lot of interesting information.