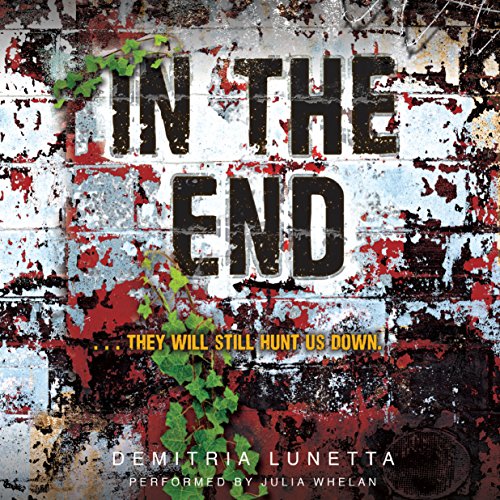 She thought it was the end of the world…but it was only the beginning of the end.

It's been three months since Amy escaped New Hope. Since she's seen Baby, or Kay, or Rice. And she's been surviving on her own, like she did before she was "rescued" and taken to what she thought was a safe haven. Then, in the midst of foraging for supplies, her former fellow Guardian's voice rings out in her earpiece. And in a desperate tone, Kay utters the four words Amy had hoped she would never hear:

Now it's a race against time, for Baby is in imminent danger, her life threatened by the malevolent doctor who had helped start the end of the world. In order to save Baby, Amy will have to make her way to Fort Black, a former prison-turned-survivor colony. There she will need to find Ken - Kay's brother - for he holds the key to Baby's survival.

But before she can do any of this, she'll have to endure the darkest places - and people - of the prison. And one small slipup could not only cost Baby and Amy their lives, but threaten the survival of the people in the After.

Demitria Lunetta has created an utterly compelling conclusion to the story she set forth in In the After. Fans of the Hunger Games trilogy will not be able to stop listening to this audiobook, which is gripping from beginning to end.

What listeners say about In the End

Absolutely loved this story. Kept me interested from the very first chapter. Story ended feeling unfinished like it was missing a chapter but other than that a really great listen!

Didn't want the story to end.

About to listen to both books again. Thoroughly enjoyed the story, performance and the narration.

In The End You Will Be Disappointed

I really enjoyed the first book and was happy when I heard there would be a second because the story didn't feel finished. While the sequel seemed to take a different tone than the first, I didn't mind and enjoyed following Amy's journey. That is...until the end! It felt like the author just decided it was time to end the book and abruptly wrapped up the different story lines. There was all of this build up with certain relationships and saving Baby, finding a cure and saving the human race. It was annoying and disappointing to have everything suddenly end like that. Julia Whelan gave a solid performance and I really enjoyed listening to her. I also thought the pacing was great. My only major issue was the writing. I would have preferred it was longer and a more complete story.

Not great. Yes- tied up a few ends. However- it was this odd up and down throughout. Then... this climatic end where everything magically wrapped itself up and rainbows and unicorns all co-existed.

This sequel to In The After was pretty good. It wasn't excellent, or even as good as the first book, but if you're like me, I needed to find out what happened so I pushed through.

The story itself is compelling. Most of the characters are simple, one dimensional and easily understood. The main character, Amy though, in this book, was absolutely annoying and extremely frustrating. Maybe it was due to her time in the ward, but I found myself feeling like she became just like the people who she called stupid in the first book. I kept finding myself exclaiming throughout the story "Who would do that?!?" as she made more and more irrational and exceptionally stupid choices. Somehow there was always someone to bail her out at the 11th hour, but despite the peril she constantly found herself in, she continued to make the same shortsighted and irrational choices throughout the story. I had to take many breaks to keep from yelling into the void (or on the bus as I listened on my commute).

Besides that issue, the story is fast paced and keeps you on the edge of your seat until the very last moment. And while it is extremely unrealistic to think someone like Amy would actually survive the After with the way she behaved, I still found myself rooting for her and Baby to find their way back to each other in the end.

The series is full of twists and turns that kept me guessing. Julia Whelan is an astounding narrator. I hope to hear more of her.

Listened to both books in 2 days!

Great story. At first I was skeptical of the zombie apocalypse type thing but after a few chapters I was fully engrossed.

love it! Unique and awesome..highly recommended!

well written, completely unique! worth a credit or the money ! must listen, the narrator did a very good job, i normally prefer male narrator's but she did well.

I loved this story! Highly recommended to all who like this type of book! I'm sad the book is now over

Just as exciting as the first book

Great sequel. Another book that I could not put down. Sad that it's done already. Looking forward to number three.

Great except the incorrect terminology

I really enjoyed the story. HOWEVER, if you’re going to write about something, you should at least do the most basic research on it to avoid sounding ignorant. The protagonist has supposedly become an expert in, among other things, firearms, but she continues to talk about the “clips” she has for her gun and loading “clips” into her gun. They are NOT clips. They are magazines. Two very different things which, when used incorrectly, make it impossible to take the character seriously. If it happened once or even twice, it may not be memorable; however, when she uses the wrong term over and over again, it’s extremely annoying and distracting. A simple google search would reveal the error in about 2.5 seconds.

As always, Julia Whelan is amazing.

This book is well written, don't get me wrong...However, some of the plot lines were recurring and obvious. The ending was rushed, too quick and without any real fulfillment for any of the characters. We're just supposed to accept that everything worked itself out??! c'mon, we need a conclusion. Or give us a third book.

Would you recommend In the End to your friends? Why or why not?

Yes/No. If they've read In the After, I'd tell them to read on and complete the series. if someone hadn't read either book, I'd be hesitant to recommend that they start the series due to the abrupt and unrewarding ending.

Very much enjoyed the sequel to the first book. Characters were compelling and story was gripping

Good story, well narrated but with some weaknesses

This post apocalyptic story of a teenager is easy to follow and enjoyable. The characters are sympathetic, though the men are slightly one dimensional. It is let down a little by some immaturity in the writing, for example the secondary character being a six year old who behaves and is treated by others like an adult from the beginning. The main character implausibly acquires impressive fighting skills in a short time and benefits from super hero clothing which nobody else seems to question. A protective shield is described as having a range of 100 yards and 100 feet, as if these measurements are the same. However, this is the author's first story and I was prepared to overlook these since the writing style was chatty and appealing, the story compelling and Miss Whelan's narration excellent. I would recommend this two part book.

I am so glad that I chose the second book. It is amazing. Not as good as the first but close. There was a lot of character development and the characters weren't good or bad. They were humans. Kinda. It isn't confusing to read or listen. I recommend it to everybody. Make sure to read In The After aswell