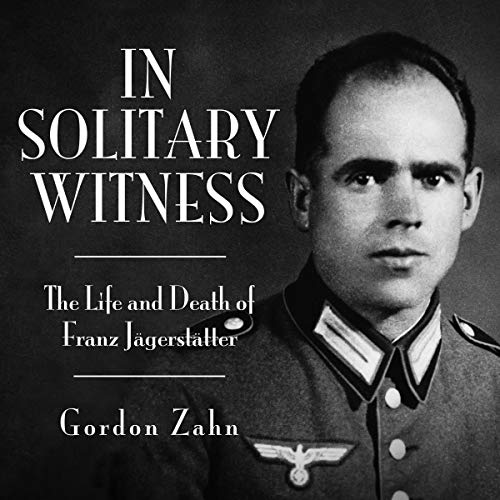 This is the book that discovered Franz Jägerstätter and his inspiring story of unyielding resistance to Nazi orders and his commitment to the dictates of conscience even at the cost of life itself.

When German troops moved into Austria in 1938, Jägerstätter was the only man in his village to vote against the Anschluss (Annexation of Austria). Although he was not involved in any political organization and did, in fact, undergo one brief period of military training, he remained openly anti-Nazi and declared he would not fight in Hitler's war. This 20th century martyr, a husband and father of three, was beheaded for his refusal to serve a ruler his conscience could not accept.

What listeners say about In Solitary Witness

The Story of a Political, Moral, & Spiritual Hero

What this book (and the recent Terrence Malick film A Hidden Life) expresses most clearly is that A REGULAR PERSON'S LIFE MATTERS. Malick's film title came from a Georg Eliot quote, which is just as relevant to this book: "For the growing good of the world is partly dependent on unhistoric acts, and that things are not so ill with you and me as they might have been, is half owing to the number who lived faithfully a hidden life and rest in unvisited tombs."

If you have seen Malick's A Hidden Life, this is the biography of the hero in it. If you have not seen the movie, I highly recommend it, for in term's of filmmaking, it is the equivalent quality of a painting by Raphael or Michelangelo. Malick immerses you in the world of the character. In addition to this biography, another insightful resource is Erna Putz's Franz Jagerstatter: Letters and Writings from Prison.

Sociologist Gordon Zahn does a superb job describing the life of Franz Jagerstatter, an Austrian man in WWII who put his life on the line to stand up for what was right. Zahn provides keen insights with his social science background but also does great biographical scholarship, having interviewed the actual people who knew this man (the book having been written in the 60's). The table of contents is as follows:
1. Introduction, 2. St. Radegund [his city], 3. The Young Ruffian, 4. The New Man, 5. From Enns to Berlin, 6. One of God's Special Friends, 7. A Train to Hell, 8. The Martyr and His Village, 9. The Marty and His Church, 10. The Martyr as a Rebel: A Sociological Summary, 11. Appendix - The Jagerstatter Documents [his writings].

Franz was called up to serve in the Austrian army after Hitler took over the country, and he refused. To accept any military post required a loyalty oath to Hitler. He would not do that. His neighbors and priests told him to give in, viewing their pleas as saving his life. Soldiers and bureaucrats tried to compel him numerous times to be a piece of the totalitarian machine of Nazism. Constantly, he was given chances to give up on his stand of conscience and have his life spared, BUT he stood firm.

Franz was asked why he should do what was right if doing so would not "change the course of things." In philosophical jargon, we would describe this as a consequentialist argument, where morality is viewed as determined by the consequences of one's actions. Furthermore, he had a wife and four children (three with his wife and one from a relationship before his marriage) who he would assuredly never see again as a result of his stance. He was beseeched to look out for them. But Franz believed there are things that are wrong no matter how you hash them out, and being complicit in them can never be justified. He understood that morality is not weighed on the scales of results, for in that case, anything and everything can be justified.

Franz had the kind of moral heroism rarely seen throughout the history of the world. Despite the lack of geopolitical results his actions would bring and despite the costs they would bring to his family, he remained firm. His strength was fueled by faith and love - his faith in God and love for his family. Zahn recounts how some priests after the war still did not want to praise Franz's actions, since they did not want to make the average Catholic think they must be so bold in each of their own lives. But Zahn asks if in contrast Franz should be held up instead as exactly the kind of example for all to live by.

As stated above, what this book (and the Malick movie) expresses most clearly is that A REGULAR PERSON'S LIFE MATTERS. No, he did not "change the course of things." No, he did not stop the war. BUT he did what was right. As so many others who were considered higher in the eyes of society capitulated to evil, turned a blind eye, or simply stayed away from resistance because of fear of persecution or execution, Franz had the heroic courage to stand for what was right. As seen in the book (but even more in the movie), Franz had a beautiful family and a deep love for his wife whom he cared about dearly. His life was important, valuable, and meaningful, even though he wasn't some famous or wealthy person. His ordinary life in a peasant community was rich and purposeful. He gave that all up, and this act was also supremely purposeful. He didn't "win" in results, but he won in humanity (in opposing a regime that murdered so many human beings), in faith (in opposing a regime that attacked the Catholic Church of which he was a member and attacked its fundamental doctrines of respect for the equal dignity of all persons... and other doctrines), and in community (in opposing a regime that would coopt his country and village and turn them into a instruments for an evil machine). He knew that might does not make right and that victory is not the measure of morality. The victory of standing firm in conscience against oppression stands above the victory of the jackboot and rifle in oppressing. As the movie quotes Socrates, "It is better to suffer injustice than to commit it." That is no easy maxim to live by, but it is one Franz, like Socrates, showed us can be lived by.

Ultimately, the life of Franz Jagerstatter shows us that it is not one's power, social position, wealth, reputation, notoriety, results, etc. that build the measure of one's character, but one's choices - what one does.

I downloaded "In Solitary Witness" after seeing Terrence Malick's film about Franz Jägerstätter, "A Hidden Life" (2019). This was the book which brought Jägerstätter's story to international attention in the 1960s.

The author spent a lot of time in Germany and Austria interviewing Jägerstätter's widow, other villagers, men detained alongside him, prison chaplains, senior churchmen, even his lawyer. The research is truly exhaustive and brings this man and his world very much to life. You wouldn't need to know much about Franz Jägerstätter's story, to find this an utterly absorbing account of one man's singular stand against Nazism and of the enormous forces pressing against him, both within and outside his community.

Full of anecdotes and readings from his writings, you get a real sense of Jägerstätter's personality, his troubled early life, his intense love for his wife and daughters and, most of all, his passionate faith in God. The author has included a documentary appendix with commentaries and letters by Jägerstätter. These are particularly impressive . Jägerstätter is often written of as a 'simple peasant' and he certainly had minimal schooling, but these writings reveal remarkable insight into human nature, into social and political systems, as well as a prophetic understanding of the situation in Europe at that time

The narration is really excellent, both sonorous and engaging. The navigation is also good and every chapter is properly labelled.