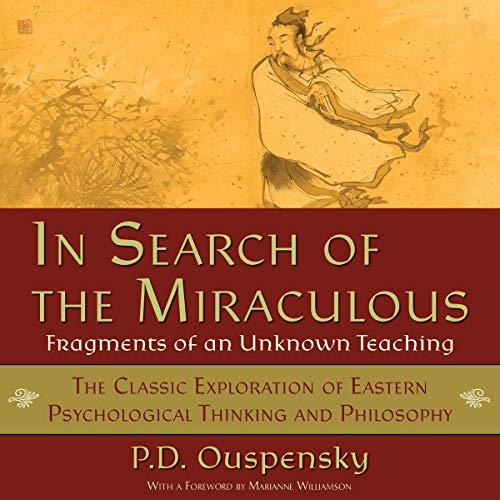 In Search of the Miraculous

In Search of the Miraculous

A new audio edition of the groundbreaking spiritual treasure, with a foreword by best-selling author Marianne Williamson.

Since its original publication in 1949, P. D. Ouspensky’s In Search of the Miraculous has been hailed as the most valuable and reliable documentation of G. I. Gurdjieff's thoughts and universal view. This historic and influential work is considered by many to be a primer of mystical thought as expressed through the work, a combination of Eastern philosophies that had for centuries been passed on orally from teacher to student. Gurdjieff's goal was to introduce the work to the West, and Ouspensky, an established mathematician, journalist, and already the author of Strange Life of Ivan Osokin, Tertium Organum, and A New Model of the Universe, was the ideal colleague to do it.

Ouspensky describes Gurdjieff's teachings in fascinating and accessible detail, providing what has proven to be a stellar introduction to the universal view of both men. In Search of the Miraculous has inspired great thinkers and writers of ensuing spiritual movements, including Marianne Williamson, the highly acclaimed author of A Return to Love and Illuminata. In a new foreword, Williamson shares the influence of Ouspensky's book and Gurdjieff's teachings on the New Thought movement and her own life, providing a contemporary look at a timeless classic.

In Search of the Miraculous is deftly narrated by Mike Fraser. All visual elements referenced in this audiobook are included in the supplementary PDF.

What listeners say about In Search of the Miraculous

I'm SO grateful for everyone who took a part in making this! Perfect relaxing narration.