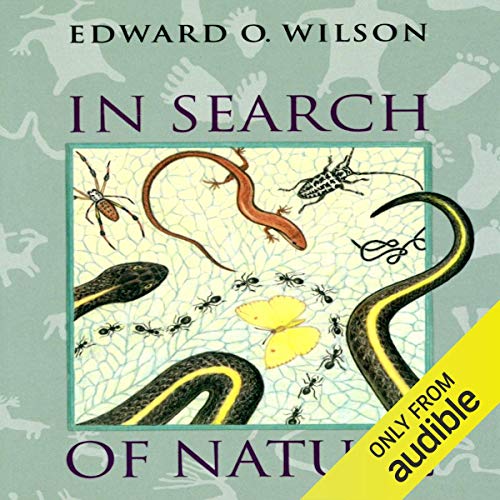 In Search of Nature

Edward O. Wilson is the internationally acclaimed American scientist who has been called "the father of sociobiology" by The Guardian.

In Search of Nature, narrated like a veteran academic by Robert Blumenfeld, is a comprehensive collection of Wilson’s eloquent essays, first published between 1975 and 1993. The informative articles address both nature - the other living things beyond the scope of us - as well as the fundamental genetic and chemical essence of our own human nature.

Part scientific exploration, part philosophical inquiry, this is an enlightening and sometimes difficult listen for those who like to think.

Perhaps more than any other scientist of our century, Edward O. Wilson has scrutinized animals in their natural settings, tweezing out the dynamics of their social organization, their relationship with their environments, and their behavior, not only for what it tells us about the animals themselves, but for what it can tell us about human nature and our own behavior. He has brought the fascinating and sometimes surprising results of these studies to general readers through a remarkable collection of books, including The Diversity of Life, The Ants, On Human Nature, and Sociobiology.

What listeners say about In Search of Nature

Older material but still relevant, worth a listen

Older material but still relevant and worth a listen. I recommend to anyone interested in E.O. Wilson, natural history and biodiversity.

I gave the "story" 5 stars because I'm sure that EO Wilson has never written anything that deserves less than that. But because of the narration, or, to be more exact, the speeding up of the narration, I gave up after about half an hour. This artificial speeding up of the narration is a problem with a lot of audio books. The unnatural pace of speech makes it impossible for me to hear it. Very disappointing. Luckily, there are a number of other books by EO Wilson available as audio books that treat the material as it should be treated. The Meaning of Human Existence is one of them.

The material and information offered by Mr. Wilson did not disappoint.

So far Mr. Barret is the better narrator of E. O Wilson’s material.