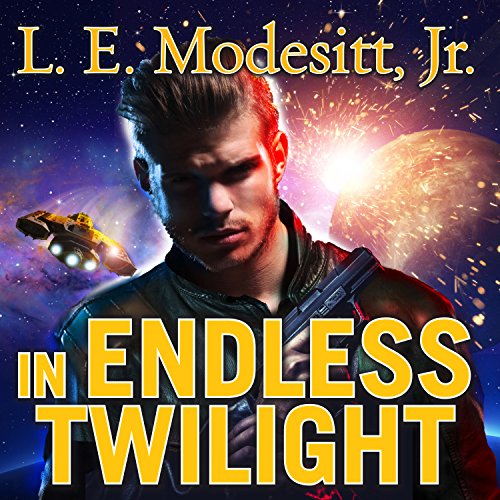 Across the Galactic Empire, from planet to planet, the lone Immortal fights. He has a plan, and he has all the time he needs. Gerswin, the Forever Hero, is determined to be the salvation of distant Earth and of humanity. Now, in the climax of L. E. Modesitt, Jr.'s epic trilogy, the Forever Hero's plans come to fruition, as he destroys the decayed, bureaucratic Empire that feeds off humanity, living on as the most legendary of human heroes.

What listeners say about In Endless Twilight

one of my favorite book series

An older trilogy a friend put me onto. I'm going to miss it. Ecologically speaking, fits our generations concerns and hopes.
The author draws you in, makes you care, and then you sit in your car unable to turn it off!
Only complaint - and it's a mild one as I adjusted - the narrator does an excellent job but the "mechanical" noises I could have done without.

Yes! As you can tell, I really, really like this series. Surprisingly, I was originally irritated by the ending, but as I have gotten older I have grown to appreciate the incite shown by Modesitt.

It is hard to capture a maudlin theme in a generally optimistic genre like science fiction, however when it is done well, it can be the best of the genre.

Have you listened to any of Kyle McCarley’s other performances before? How does this one compare?

Without spoilers, I can say this story is full of content, well thought out, with a bittersweet ending.
Excellent!