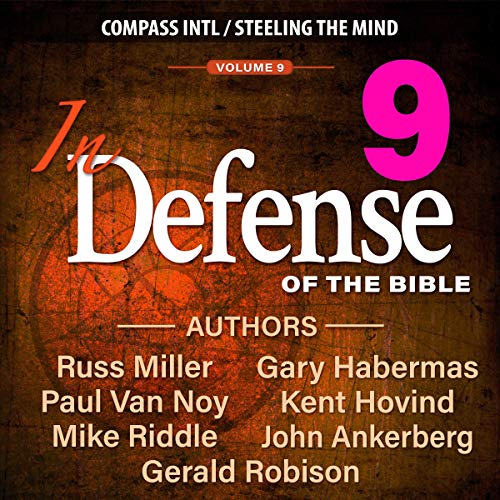 In Defense of the Bible, Volume 9

If someone says to you, "Science has proved the Bible to be false," how would you answer? Russ teaches you 10 zingers to use for comebacks to the most stupid ding-a-ling questions people ask.

This may be the most misunderstood of all Biblical doctrines because if you don't understand dispensations, you can easily misunderstand a lot of God's Word. Paul walks us through each dispensation, explaining their characteristics, associated number and color, responsibility and failure.

3) Defending Noah and the Worldwide Flood by Mike Riddle

What are the evidences for a worldwide flood some 5000 years ago? Is it even logical? Mike, a former Marine officer, Microsoft executive, and decathlon champion, uses awesome graphics to show you how to boldly defend the most recognized of all the Old Testament miracles.

4) The Case for Jesus' Resurrection by Gary Habermas

5) Why Evolutionists are Changing to "Abrupt Appearance" by Kent Hovind

The overwhelming facts of Biblical creation are forcing non-Christian scientists into "abrupt appearance".

This message shows why, even if you are pre-trib, pre-mil, you shouldn't hope rapture will bail you out! Great evangelistic message!

Oh, this is one for the ages! Using wit and humor, Gerald will take you on a majestic walk through many of God's creative works from the animal kingdom to vastness of space. It shows the creative delicacy and absolute largeness of our Lord! Entertaining!

What listeners say about In Defense of the Bible, Volume 9