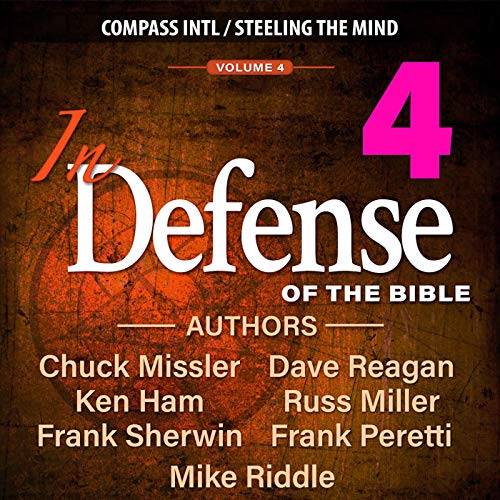 In Defense of the Bible, Vol. 4

Chapter One - High Tech & the Bible by Chuck Missler

Pulling from seemingly every book in the Bible, Chuck outlines a bevy of obvious and not so obvious technology-driven verses.

Noah's worldwide flood was not only a true event, it was God's judgement on a world of sin.

The Bible is coming under attack from every side - doctrinally, culturally, and scientifically. But Russ shows, in no uncertain terms, scores of reasons that the holy scriptures are 100% trustworthy.

Chapter Four - Dinosaurs and the Bible by Frank Sherwin

Recent discoveries of dinosaur soft tissue and blood are throwing wrenches in the evolutionary model of billions of years and Frank, in a no-nonsense and quite witty way, exposes it all.

Chapter Five - The Church of Confusion by Frank Peretti

Frank looks closely at the scriptural outline given to us by Paul in the Epistles. What are we doing well and where have we strayed off course?

Defending a word-for-word Bible translation is going out of vogue in many churches.

Chapter Seven - The Evil Fruit of Evolution by Russ Miller

Russ takes you on a journey through the Satanically-centered belief in evolution to its end conclusion - a Godless world - and contrasts that with the power and majesty of Creation.

Mike gives us easy-to-understand examples, and will show the absurdity of the "chance" that humans could have evolved.

What listeners say about In Defense of the Bible, Vol. 4

The truth shall make you free.

If you want to know the truth about Man's beginning, download this audio. Good stuff.