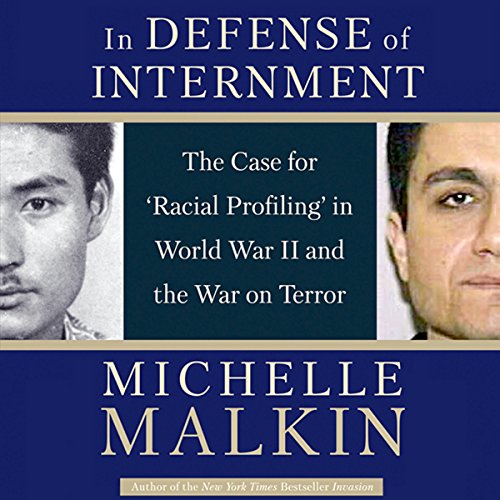 In Defense of Internment: The Case for Racial Profiling in World War II and the War on Terror

Everything you've been taught about the World War II "internment camps" in America is wrong:

The need for this myth-shattering book is vital. President Bush's opponents have attacked every homeland defense policy as tantamount to the "racist" and "unjustified" World War II internment. Bush's own transportation secretary, Norm Mineta, continues to milk his childhood experience at a relocation camp as an excuse to ban profiling at airports.

What listeners say about In Defense of Internment: The Case for Racial Profiling in World War II and the War on Terror

This is a very demagogic book

Would you try another book from Michelle Malkin and/or Craig Allen?

Probably not. the writing is good, but the facts are all manipulative and ill checked. there are no gray areas, only black and white - this is not how things goes.

Would you ever listen to anything by Michelle Malkin again?

What does Craig Allen bring to the story that you wouldn’t experience if you just read the book?

noting that i can think, but it is more the content than the reading.

Do you think In Defense of Internment: The Case for Racial Profiling in World War II and the War on Terror needs a follow-up book? Why or why not?

No, it is ill facts book as it is.