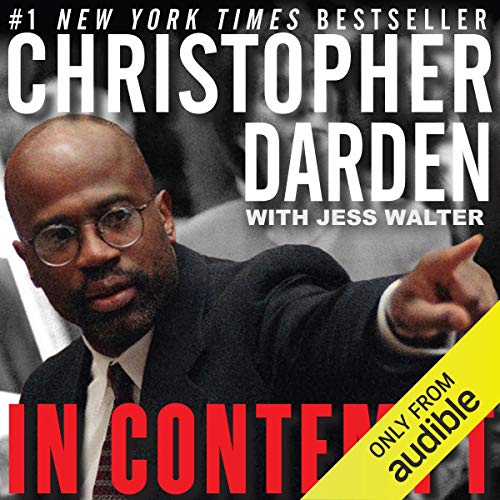 For more than a year, Christopher Darden argued tirelessly for the prosecution, giving voice to the victims in the 0.J. Simpson murder trial. This number-one New York Times best seller is an unflinching look at what the television cameras could not show: behind-the-scenes meetings; the deteriorating relationships between the defense and prosecution teams; the taunting, baiting, and pushing matches between Darden and Simpson; the intimate relationship between Darden and Marcia Clark; and the candid factors behind Darden's controversial decision for Simpson to try on the infamous glove, and much more.

Out of the sensational frenzy of "The Trial of the Century" comes this haunting memoir of duty, justice, and the powerful undertow of American racism.

A stunning masterpiece told with brutal honesty and courage.

What listeners say about In Contempt

Not bad but I was expecting the full book as it labeled Unabridged when purchasing.

Great story & well told but far too short. I wish I had read the book but not enough time to read.

Darden a v. good man living in a crazy world

He writes clearly and with obvious passion and integrity.

Excellent to hear the voice and get to know one of the key players in one of the most outrageous true legal stories of the 20th century.

What did you love best about In Contempt?

Beware, though, this is advertised as unabridged, yet it is only less than 3 hrs. and at the end it says abridged.

Pretty sure this is an abridged version of book. That’s too bad, but I Still recommend it - I’ve read 6+ books on the case. Darden has a unique voice and perspective on the case. I love that Darden did the reading.

I listened to this while crafting & it was interesting & enjoyable. would definitely recommend if a person is wanting more info on the OJ Simpson trial.

Marcia Clark's book was more detailed regarding the case itself, but Chris Darden dove into what this case really turned into and what that meant to the justice system. I really appreciated listening to his side of this whole story, what he was going through with the slow loss of his brother, and his fight for justice. It's a quick read, but hard-hitting in its points. I have a lot of respect for Mr. Darden.

I truly enjoyed this book. it was raw honest and true to Chris Darden. I think I I appreciated this book more because it was Chris Darden voice and it was very authentic very as if you were in the court with him and knowing the background emotions that we're going on at the same time.

Very let down by this book. It was more about Darden and not enough about the case.... Very let down.

Good view of the other side.

I liked listening to Chris Darden's take on the trial and his outrage at how it played out. It is hard not to be angered at the in justice going on at the time but playing your part in that injustice is not the answer.

In the end this was worth the listen. Intuitive and insightful at times, it also a reflection of the naive idealism which undermined the prosecution. The strength of the narrative only undermined by persistent underlying self-indulgence.

I watched the trial and got caught up in the hype. I remember this evidence but I didn't see it this way. I more remember the defence case. Wow how easy it is to look past the truth!!! Same it was an abridged version though