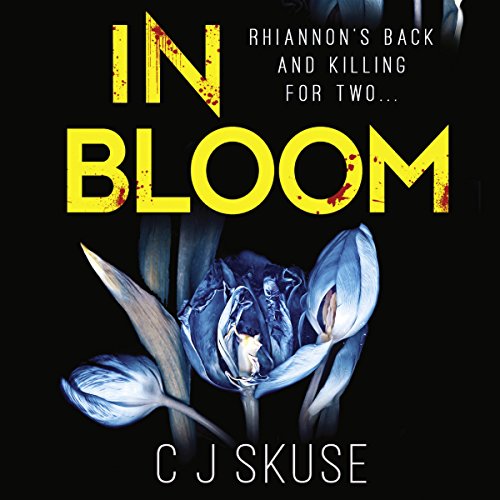 If only they knew the real truth. It should be my face on those front pages. My headlines. I did those things, not him. I just want to stand on that doorstep and scream it: IT WAS ME. ME. ME. ME. ME!

Rhiannon Lewis has successfully fooled the world and framed her cheating fiancé Craig for the depraved and bloody killing spree she committed. She should be ecstatic that she’s free.

Except for one small problem. She’s pregnant with her ex lover’s child. The ex-lover she only recently chopped up and buried in her in-laws garden. And as much as Rhiannon wants to continue making her way through her kill lists, a small voice inside is trying to make her stop.

But can a killer’s urges ever really be curbed?

"This darkly comic novel...has the potential to become a cult classic." (Daily Mail)

"You must read this book especially if you like your (anti) heroes dirty-mouthed, deadly and dark, dark dark. Adored it." (Fiona Cummins, author of Rattle)

"This anti-hero is psychotic without doubt, sexually voracious and incredibly funny." (Shots Magazine)

What listeners say about In Bloom (Sweetpea Series, Book 2)

Interesting.
Disturbing.
A bit too sympathetic to a serial killer, but nothing outrageous compared to say, Dexter.

It did rely a lot on the previous book to drive the plot. But I hadn’t read it and didn’t notice big gaps.

I received this audiobook for free in exchange for a review.

Rhiannon Lewis is not the first murderous anti hero of a literary work. Most notably, there has been the self serving, talented Mr.Ripley, moving up in wealth and society through his carefully choreographed killings. And, of course, Dexter, who pacified his dark passenger by eliminating those whose own serious misdeeds were untouchable by the law. And both of these characters, despite their sociopathic actions, were nevertheless charming and endearing to those, at least, not at the sharp end of their more vicious attentions.. Sadly, pregnant Rhiannon might have rid the world of a couple of sexual predators - her justification for allowing her inner anger loose - but she is also an unpleasant and miserable protagonist, moaning, despising and using those around her, taking advantage of the everyday kindness of others whilst manipulating those she saw as weaker to take revenge. Her internal musings are crude and unpleasant, designed, no dkubt, for humour but definitely falling short. The killings, too, are crudely achieved and the whole seems so unkikely.

Narration by Georgia Maguire is good except that the voicings of the assorted protagonists often seems inappropriate for the character speaking, and, in particular, that of the unborn child, a baby girl, with whom Rhiannon has an ongoing dialogue. Perhaps this, too, was supposed to be amusing rather than the districting interruption it became.

The writing of In Bloom was good. But the story? Apart from bad temper, grievances, and self pity, very little really happens outside of pregnancy, heartburn, nausea and other lavatory movements, plus some attention from a D.I.Jericho. And it takes 12 hours to do this. Perhaps had I first read the earlier book I might have been more invested in Rhiannon and her grubby little world. As it was, I finished it but was disappointed.

I really enjoyed Sweatpea (the first novel) so was slightly on tenderhooks when reading this sequel, however, I need not have worried. I wondered how on earth the cliffhanger would be resolved but found the solution satisfying instead of contrived. This novel explores virgin territory- the mind of a pregnant psychopath.I don't think this has ever been done before? The voice the narrator used for the fetus was hilarious and the dark humor just as entertaining as the first novel, although I was disturbed to have made the kill list- yes, I do pick raisins out of my food!.The only reason I gave the story 4 stars instead of 5, is that I felt the middle slightly meandered. Once again we are left on a cliff hanger and I for one, can't wait for the next installment.

Best books I listened to in ages!

These 2 books just HAVE to be made into a film! So made twists and turns, funny and so so wrong - but so so right!

So I wasnt 100% in to the story at the beginning but regardless of this I still found myself listening to it for hours at a time. i was worried that the story would follow the "I'm a changed woman because I'm pregnant and all my problems are gone" storyline, but I was pleasantly proved wrong.

Sad, sick, twisted, disturbing and deliciously dark humour are all in here. This books picks up literally where the other left off.
Rhinannon is back in business, this book started well, I did get a bit disappointed in the middle as I thought it was quite flat and could not see how it would get going again, but then it took off really well. In hindsight it wasn’t flat it was setting up for the next rollercoaster ride. Without giving any spoilers away this book is great and it ends setting itself up for a third instalment. I can’t see one in the pipeline on google, but surely a 3rd book is in the making? It can’t be left there. Surely?

I really enjoyed listening to this. Narrator was brilliant.

I absolutely loved these books ! refreshing funny and dark. I cannot wait for the next one.

Sweet Pea is in my Top 5 books of all time and I've been eagerly anticipating In Bloom for so long! Perhaps my expectations were just too high and therefore it hasn't delivered. I kept waiting for something huge to happen but it never did. I missed the hilarious observations Rhi used to make on her co workers from the first book, and I missed the gory, graphic but wittily written murders. I didn't particularly enjoy the baby/subconscious musings in this sequel. Georgia Maguire is one of the best narrators out there though. I look forward to reading book 3 in the future though I'm not quite as excited about it now, having found myself disappointed by In Bloom.

Excellent all round . Uncomfortable subjects dealt with raw honesty and cracking wit. Made me cry for her and shout out laughing. Simply brilliant......Would love another one !

I have been waiting for this book for a while after the 1st 1 and will now be waiting for the next with anticipation. A great story with dark humour, loved it.

i throughly enjoyed both books. they were a good introduction to audible with excellent narration.

Loved it just as book one ! Listened in two days . Best books I’ve listened to in a long time .