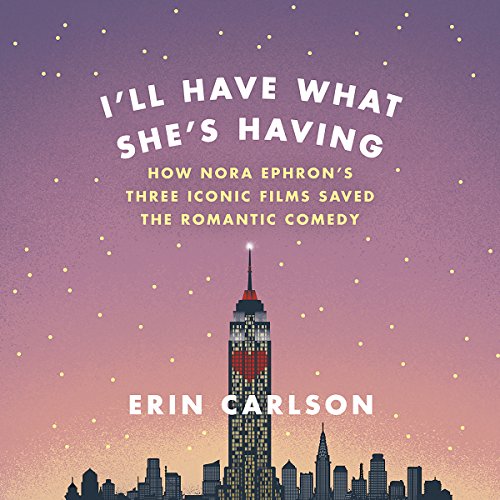 I'll Have What She's Having

A backstage look at the making of Nora Ephron's revered trilogy - When Harry Met Sally, You've Got Mail, and Sleepless in Seattle - which brought romantic comedies back to the fore, and an intimate portrait of the beloved writer/director who inspired a generation of Hollywood women, from Mindy Kaling to Lena Dunham.

In I'll Have What She's Having, entertainment journalist Erin Carlson tells the story of the real Nora Ephron and how she reinvented the romcom through her trio of instant classics. With a cast of famous faces including Reiner, Hanks, Ryan, and Crystal, Carlson takes listeners on a rollicking, revelatory trip to Ephron's New York City, where reality took a backseat to romance and Ephron - who always knew what she wanted and how she wanted it - ruled the set with an attention to detail that made her actors feel safe but sometimes exasperated crew members.

Along the way Carlson examines how Ephron explored in the cinema answers to the questions that plagued her own romantic life and how she regained faith in love after one broken engagement and two failed marriages. Carlson also explores countless other questions Ephron's fans have wondered about: What sparked Reiner to snap out of his bachelor blues during the making of When Harry Met Sally? Why was Ryan, a gifted comedian trapped in the body of a fairy-tale princess, not the first choice for the role? After she and Hanks each separately balked at playing Mail's Kathleen Kelly and Sleepless' Sam Baldwin, what changed their minds? And perhaps most importantly: What was Dave Chappelle doing...in a turtleneck? An intimate portrait of one of America's most iconic filmmakers and a look behind the scenes of her crowning achievements, I'll Have What She's Having is a vivid account of the days and nights when Ephron, along with assorted cynical collaborators, learned to show her heart on the screen.

"This smart and witty book is as much about the life and times of the brilliant Nora Ephron as it is her three great late-20th-century rom-coms: When Harry Met Sally (1989), Sleepless in Seattle (1993) and You've Got Mail (1998), with Meg Ryan standing in for Everywoman in all three. This is an excellent piece of Hollywood scholarship, thoughtful and entertaining. Make no mistake: It's not a love letter to Nora. Just like Ephron, writer Erin Carlson wields a sharp pen." (Toronto Star)

"Perky and approachable...those who miss funny romantic comedies will enjoy this detailed behind-the-scenes look at three of the best." (Library Journal)

"When the subject is Nora Ephron, culinary metaphors prove irresistible: Erin Carlson has cooked up a dish full of delicious insight into an icon who was both warm and snobbish, full of juicy tidbits about a feminist who preferred to hang out with the guys, a trenchant trailblazer with an old-fashioned belief in love. I'll Have What She's Having offers a satisfying portrait of a lady who wasn't always 'nice' but who nevertheless created timeless moments to fill our hearts and give us hope." (Faith Salie, author of Approval Junkie and contributor to CBS Sunday Morning)

What listeners say about I'll Have What She's Having

I so enjoyed the insider stories about the making of these movies and about the development of Nora Ephron’s filmmaking career that I was willing to overlook some elements that grated. In particular, I was often taken aback by Erin Carlson’s seeming assumption that the book’s readers are all millennials who need to have everybody born before about 1960 explained to them and in their terms. Nora Ephron is like Taylor Swift, really?

Much as I admire Nora Ephron, I seriously question Carlson’s premise that she saved the romantic comedy movie. She doesn’t even really try to make her case, so I guess it’s just a provocative subtitle to grab readers. Finally, I just don’t see You’ve Got Mail as being in the same league as When Harry Met Sally or Sleepless in Seattle. Maybe other people feel differently. After reading the book, I think I will now need to see the movie again. I admit I only watched it once and have never felt any urge to stop and watch it again if I happen to come across it while channel surfing—unlike the other two movies.

Despite my criticisms, I enjoyed the book because it’s an anecdote-fest about interesting people. I always enjoy reading about the details of how scripts, casting and production came together, and that’s here in spades. Lots of stories about the big names, Ephron, Meg Ryan and Tom Hanks, but many more about other names in the business from Rob Reiner down to Ephron’s regular prop guy, assistant and her friends and family. And a ton of stories about sets and location filming, especially in New York. Carlson does a very good job with this, so that you feel like you’re in the production.

I listened to the Audible version of the book. Amy Tallmadge’s reading is so-so, except when it comes to pronunciation, where I was just astonished at how often she mispronounces. Occasionally dictionary words (decor becomes deecor, outre becomes out tray), but it’s the constant mispronouncing of names, including a lot of famous names, that is a real annoyance. How can it be that anyone in media doesn’t know how to pronounce these names and how did the producers let this pass? Perfectionist Nora Ephron would be pulling her hair out.

It’s one thing to not be able to pronounce Abramowitz correctly, but to pronounce Jacques Tati’s last name as totty? How about pronouncing Charles Boyer as if he’s not French, but some guy from Kansas City? And here are some of the others that I remember: Warren BEEty, HasKELL Wexler, Sophie KINzulluh (Kinsella), Carole LomBARD, Suhlynn (Celine) Dion, William Sa-roh-ee-an (Saroyan). The thing is, I would be so amazed at these mispronunciations that I’d lose track of what came after and would have to back up. Note to Ms. Tallmadge: In the future, at least check the pronunciation of the names.

After much anticipation this was a disappointment

I had read a very nice review of this book in the Washington Post, love Nora Ephron and her movies, and waited with anticipation for this book to come out. Hmmm.

It is difficult to get past the narration. The entire book is done in a very annoying sing-songy style that frankly grates. And the female narrator does a very poor job of narrating male characters. She made both Rob Reiner and Tom Hanks (and every other man in the book) sound identical, and kind of like jerky teenagers.

I got the book because I wanted to learn about the making of Nora Ephron's three most famous movies. And there was some of that in the book certainly. But you also have to wade through reams of gossipy dish about the love lives of Rob Reiner, Tom Hanks, and Meg Ryan. None of which I'm interested in.

Not sure if the author saw any of these movies when they first came out, in the context of their time, but if she did, she surely was a very young child. It's certainly possible for say a 25 year old person living today to write a brilliant book about the making of say Casablanca, but wouldn't it be far more interesting to read that book written by literally anyone who was there and participated in the movie's making? Rob Reiner directed When Harry Met Sally, if he writes a book about Ephron and her movies...I would buy it in a heartbeat.

Erin Carlson is an entertainment journalist, and as mentioned focuses a good deal on the personal lives of those involved, and seems to see these movies more in the context of today than in the perspective of their debuts. Lots of facts and figures are mentioned, plus lots of clothing worn to premiers, parties, and award shows, are commented upon.

So I was disappointed both in the book, and the narrator. The book As You Wish by Cary Elwes about the making of the movie The Princess Bride, is flawed, but superior in every way to I'll Have What She's Having.

Narrator didn't do her homework

The Narrator will drive you NUTS, unfortunately...

...because the content is chalk-full of terrific anecdotes and great content from Epheon’s brilliant career. BUT THE NARRATOR! Egad and oh Vay! It felt as if she were auditioning for Rebecca of Sunnybrook Farm! Cutesy and pandering delivery when it wasn’t even remotely necessary, and in fact rendered the content false because of it (anyone who truly knows Ephron’s wry style would know this woman’s verbal “jazz hands” would drive her up a tree.). And as others noted, there are some cringe-worthy pronunciations of some seemingly commonplace words and names. There’s truly nothing worse than a bad narrator ruining what would have otherwise been a great gem of a book.

If you love movies...

Once you get past the readers unusual speech, and her obvious frustration of being an actor who is asked to read and not give an over-the-top performance, the book is a love letter to Nora Ephron and romantic movies throughout time.