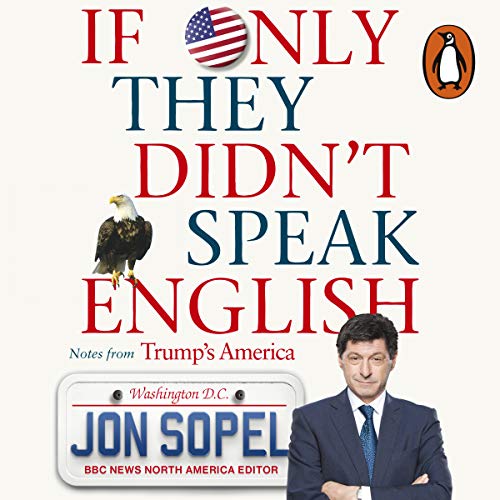 If Only They Didn't Speak English

As the BBC's North America Editor, Jon Sopel has had a pretty busy time of it lately. In the 18 months it's taken for a reality star to go from laughingstock to leader of the free world, Jon has travelled the length and breadth of the United States, experiencing it from a perspective that most of us could only dream of: he has flown aboard Air Force One, interviewed President Obama and has even been described as 'a beauty' by none other than Donald Trump.

Through music, film, literature, TV and even through the food we eat and the clothes that we wear we all have a highly developed sense of what America is and through our shared, tangled history we claim a special relationship. But America today feels about as alien a country as you could imagine. It is fearful, angry and impatient for change. Reflecting on his journey across the continent to cover the most turbulent race in recent history, Jon Sopel lifts a lid on the seething resentments, profound anxieties and sheer rage that found its embodiment in a brash, unpredictable and seemingly unstoppable figure.

In this fascinating, insightful portrait of American life and politics, Jon sets out to answer our questions about a country that once stood for the grandest of dreams but which is now mired in a storm of political extremism, racial division and increasingly perverse beliefs.

What listeners say about If Only They Didn't Speak English

Jon manages to assess and examine contemporary America, and Americans - including those who supported Trump - fairly and objectively. And he does so in an extremely entertaining, thought provoking, scary, eye-opening and balanced way, establishing the whys and wherefores of where our friends across the Pond are in their minds. It's a superb and brilliant read. Or as we say in Welsh "ardderchog" (excellent) 👏 I thoroughly recommend it!!

I really liked this book and listened to it all in just a few days. I usually dip in and out of different books but this one really held my attention. Lots of interesting information and ideas. It gave me a much deeper understanding of familiar issues. Although I already knew America was very differen to Britain it was amazing to get an insiders perspective of just how different it is. I definitely recommend this book.

Brilliant insight into the differences between ourselves and our American cousins

Really enjoyed this book, Jon Sopel gives a brilliant and simple look at the differences between ourselves in the UK (or should I say us here in Europe) and the good ol' US of A! Whilst I say simple, I don't mean in a 'Janet and John' way, the book is full of interesting facts (none of which appear to be alternative facts either) and statistics that make it easy to see how really quite different our cultures are. If you've been fortunate enough to have spent anytime in the US, somethings that Jon talks about will be instantly recognisable.
Jon's narrative is excellent and it's like listening to a much extended news cast (and I mean that in the best possible way). It's clear, concise with the odd turn of humour that makes it not only very easy to listen to, but also very easy to digest and understand.
I personally think the US is a fantastic country, and still do, but this book made me realise that we here in the UK have much more in our common with our cousins on the continent, than we do with our cousins on the other side of the pond.
Highly recommended

Insightful, interesting, at times saddening (the chapters about guns and anxiety highlights for this) and utterly depressing (the seemingly endless obsession the UK has about the ‘Special Relationship’)

I ripped through this in 2 days. It’s just impossible to stop if you don’t have to.

Highly recommended if you have any interest in the politics of our ‘Special’ revolutionary cousins. What thing is absolutely clear is that this country which we feel so close to is actually a very, VERY, different place...

Another account of our post-truth society and yet, I found this book highly amusing. Whether it's Jon Sopel's interpretation of the non-existing 'special relationship', or his dry and factual yet humorous way of talking about what led to Trump and Brexit as well as the Post-Trump and Post-Brexit era (I'm not sure what's worse), I enjoyed this book from start to finish. And if the world falls apart, one can count on the BBC and their reporters to do an excellent job reporting on it.

This is a lively account of this BBC journalist’s experiences of working in the USA. He describes the many differences between the UK and USA in attitudes to social issues such as abortion; the huge divergence in support for gun ownership between the countries; and the far greater influence of religion on the political scene in the US. As a political journalist he writes much about the recent presidential election and makes no secret of his low option of Donald Trump and the latter’s shameless use of the Twitter to promulgate a multitude of prejudices and falsehoods. What I found depressing is the gullibility of the general public in lapping up the all the false news, no matter how preposterous, much of it aimed at Hilary Clinton. It’s a sad fact of modern life that the internet, though wonderful in many ways, is also the vehicle for duping the public.

The author narrates his own book with verve.

A great look at USA from a Brits perspective.

loved It, intelligent well presented look into how mass media is becoming less relevant when fact based journalism is replaced by emotional judgement.

a great dose of history for context which helps the understanding specially with regard to the NRA and gun culture.

A journey into the world of 'posr ttuth' America. vividly portrayed by Jon Sopel. Difficult to believe at times and impossible to ignore.

supberb commentary on the last 18 months in USA

A really interesting collection of essays from a good reporter who has been at the centre of things. The style of delivery was a little "full on" but a brilliant and perceptive analysis of modern American.

This is an engrossing and enjoyable read/listen. I follow the insanity that is the Trump Presidency, but Jon (as journalists always can) revealed fascinating things that I did not know before. Having travelled quite a bit myself in America over 30 years, I disagreed with Jon’s take on the ebullient Patriotism of Americans which he sees as endearing. I personally think it’s damaging both to individual Americans and the world in general. As the book passed that topic and moved on to other interesting observations about American society, it seems to me that his views on their Patriotism was born out of him living there in the midst of what is a vastly paradoxical psycho-social system. All in all a cracking read/listen.