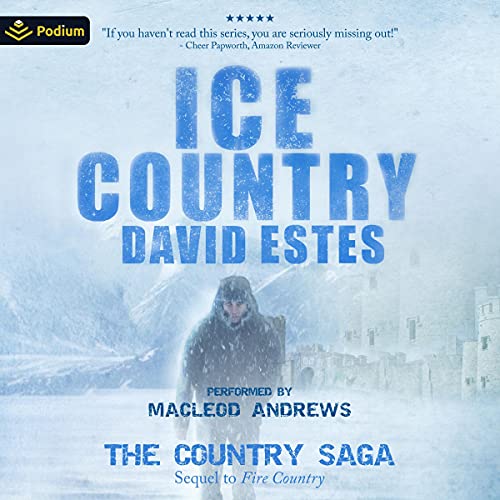 Dazz, a hard-edged, fun-loving Icer, likes fighting, particularly while at his favorite watering hole. However, while recovering from a particularly bad break up, his decision to engage in a brutal pubroom brawl leads to a series of events that thrust him into a dark and mysterious scandal involving King Goff, the ice country ruler.

When his seven-year-old sister is abducted in the dark of night, Dazz pledges to do whatever it takes to get her back, embarking on a quest that threatens to rip apart the very fabric that's barely holding his shattered family together.

Along the way he meets a group of unlikely allies in the form of a travelling group of fire country natives. Can Dazz, when joined with his best friend, Buff, and new tan-skinned friends, defeat the King and his guards before it's too late for his sister?

What listeners say about Ice Country

after following the stories of the Sun, Star and Moon dwellers this series came in my suggested list. it sat in my wish list for a while,I was not convinced I'd enjoy it. how much is too much? after a break for some other adventures I figured I'd give it a try. starting with the first of these three it took me just 2 weeks to devour them.
I don't think it matters which series you start with as after finishing this one I believe it would've been okay either way. though there ARE things that I caught in this series that made me glad I'd heard the Dwellers saga first.
give it a go, if you liked The Dwellers you'll like this!

Another stellar story and performance

Ice Country is the sequel to Fire Country and starts out with Dazz, a fun-loving Icer who loves to brawl! When Dazz's little sister gets kidnapped, he embarks on a quest along with his best friend, Buff, to find and rescue her. Along his journey, he meets up with a band of Heaters from Fire Country.

As usual, Estes' descriptions have me experiencing the world of Ice Country side by side with his characters. While listening to Ice Country, I was bundled up in my blankets shivering and when Dazz and Buff wander into Fire Country, the next thing I know I'm throwing off my blankets feeling as warm and hot as our beloved characters. Estes has a knack of bringing out many different emotions in me throughout his books. And as always, the antics of his characters have me bursting out laughing no matter where I'm at causing some strange looks if I'm sitting at the coffee shop!

This is the second time I've read Ice Country, the first time was in print. Listening to Macleod Andrews as Dazz was an even better experience this time around. I adore Dazz and hearing him brought to life by the talented Andrews was amazing!! Although to be honest, Skye wasn't quite my favorite voice. All in all though, the narration was very well done and I enjoyed it immensely.

I have Water and Storm Country already downloaded and queued up and can't wait to listen to it. Two of my all time narrators are performing so I'm really excited to begin!

can't wait for the last two books to come out to listen to them both.

Getting Cold in a good way

I really enjoyed this story. The characters, the plot, and the merging of stories in the saga flowed well.

Macleod Andrews was enjoyable to listen to. His voice inflections were subtle and yet different. Nothing over the top. His pace and tone were spot on.

Overall my favorite book in this 3 part saga. I would recommend it to all.

I loved this sequel

I absolutely loved this sequel to the Country Saga. I laughed, I cried. I was on the edge of my seat the whole way cheering on Dazz and Buff and the Fire Country Tri-Tribes as they fought their way through tough battles.

Note, review is for all 3 books as a whole.
I listened to this series of books as I enjoyed the dwellers saga and the 4th book of that series is also the 4th book of this series, so thought I might aswel listen to these. the books themselves are good enough, nothing that's going to blow your mind but ok really. I do quite like how multiple story's of several main characters all end up tying in together.
my main gripe would be the accents of the ummmm.... voice actors?? I don't know what they are called but they truly are awful. The replacement of curse words for "scorchin'" or "icein" is a tad annoying but a bit if a gimmick and not the end of the world but overall I find the reading, accents and pronunciations really annoying. but overall worth a listen I suppose but dwellers saga is far better.