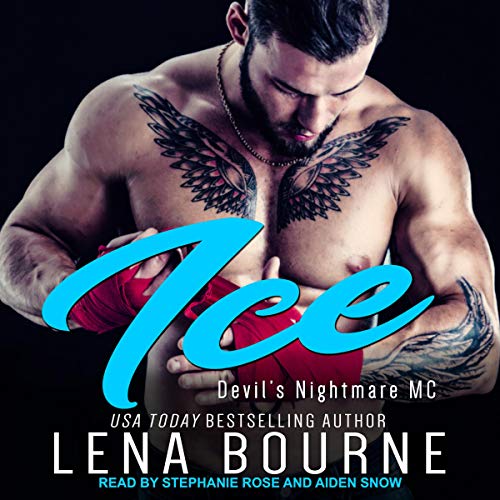 Ice: The fighting cage made me a monster, and that's what came out when they freed me. She thinks I saved her from monsters, but she just fell into the hands of an even bigger one. She also thinks we're falling in love. She's wrong. I forgot how to do that. Besides, love's not what I want from her.

She should've run away from me when I told her to do it. Because now it's too late.

Barbie: What I didn't give freely they just took anyway. Until there wasn't much left to give. But he showed me different, so I'm giving what's left to him. I'm not letting him toss me aside. I'm staying right where I am, in his arms, and in his bed, and on the back of his bike.

We'll find the road together or get lost trying. Because Ice and me, we were made for each other.

What listeners say about Ice

🌻A little cheesy, for sure!🌻

🌻🌻🌻🌻🌻V from Kansas🌻🌻🌻🌻🌻 Well, I’m glad Ice finally got his HEA but, this story was predictable and pretty flipping cheesy. This story had a bit more angst, then the other books, in this series. ICE is reluctant to accept a relationship and doesn’t treat Barbie, the Heroine, so well. To be honest, I broke my own rule, by spending a credit on a book that is so short. If I were evaluating this book, on its own, I would return it. However, since I own the rest of the series, I’m going to keep it. My advice to anyone trying to decide whether to purchase this book is, to wait for a sale and save your credit for a longer, better written book!