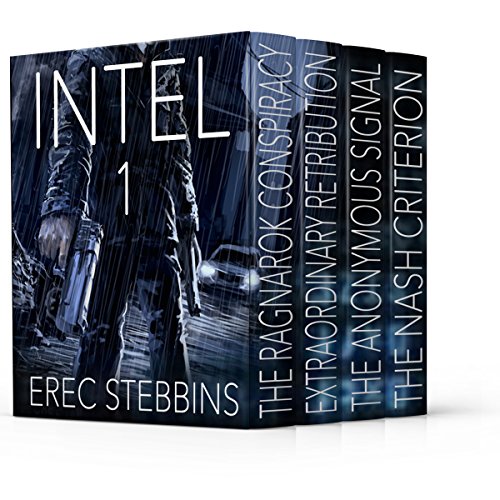 "Stebbins is the master of the thinking reader's techno-thriller." - Internet Review of Books.

The Ragnarök Conspiracy: "Fortify your shelf of Armageddon thrillers with this promising newcomer." - Library Journal.

A Western terrorist organization targets Muslims around the world, and FBI agent John Savas must put aside the loss of his son and work with a man who symbolizes all he has come to hate. Both are drawn into a race against time to stop the plot of an American bin Laden and prevent a global catastrophe.

"Outrageously entertaining: epic, explosive, subversive, engaged, and compassionate, like a Michael Bay movie written by Aaron Sorkin." - Chris Brookmyre, author of Where The Bodies Are Buried.

Evil is not born of madness, but madness of evil. Follow a rogue CIA agent who uncovers a shocking conspiracy, deep in the intelligence community. But a shadow follows the investigation: a killer bent on a revenge so terrible, it is only matched by the crimes committed against him. In the end, no one escapes unscathed, no beliefs will go unchallenged, and no wrong will escape the terrible, final, and extraordinary retribution.

What listeners say about INTEL 1

The 4 stories were thrilling and captivating. However, I really struggled to keep listening due to the awful narration.

I really enjoyed this twisted tale. It kept my attention from start to finish. It is full of surprises and suspense.

Totally enjoyed it except for the unnecessary language. I would have given it 5 stars.

This was a series of books that I could have loved. The themes and motifs are familiar readers of sci-fi, techno thrillers and crypto-conspiracy whodunits. However, the overblown plot arcs and wallowing in violence, left a nasty aftertaste. I probably should have given up after book 1, but there was something compelling about the pacing and like a reluctant witness to some brutal act of violence I wasn't able to turn away.