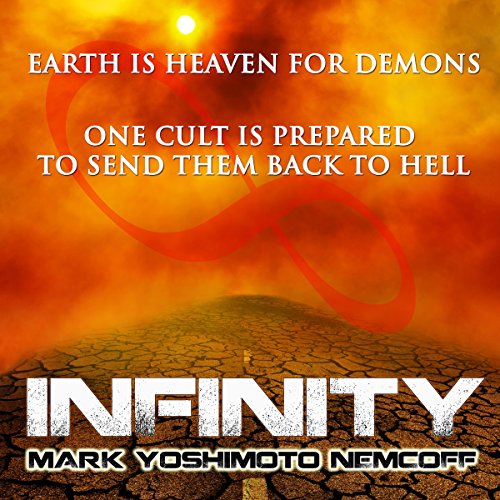 A demon-hunter becomes the hunted when an unstoppable assassin from Hell comes to Earth on a mission to kill....

Earth is Heaven for Demons....

According to the prophet Ranajee, demons live among us in human form. They exploit man's vulnerability to place everyday people in a condition of suffering that exists right here on Earth. As more demons enter our world, this condition will never end until all of humankind is enslaved.

Ranajee, however, is the pen name of a mysterious and seemingly ageless leader of a cult of demon-hunters known as the Church of Infinity. It is their chosen task to eradicate, with extreme prejudice, those who endeavor each day to hasten the end of mankind.

And when Ranajee gets his hands on a powerful artifact that could allow him to breach the borders of Hell, an unstoppable demon assassin is sent to wipe out all the members of the Church of Infinity once and for all.

Now one last surviving demon hunter must escape from prison and go on the run. With the help of a conspiracy-theorist punker named Rachel, he goes on a search to track down this artifact in order to trade it for his life and save the human world from certain doom.

Mark Yoshimoto Nemcoff is a best-selling and award-winning author who has been known to occasionally moonlight as a voice-over artist and independent journalist. He is a former Sirius Satellite Radio drive-time-show and T.V-show host who has been featured by Playboy magazine and Access Hollywood. Mark currently resides in Los Angeles.

"For fiction that reads like a bloody summer blockbuster and makes you move in your chair like a first-person shooter, look no futher than Mark Yoshimoto Nemcoff." (Scott Sigler, New York Times best-selling author)

Narrator's voice sounded like he was reading a podcast

Not a single one

Even though it was only 5 hours, I could not even bring myself to listen that long. Gave up after 1 1/2 hours. The storyline did not hold my attention and the narrator was just horrible. I picked this one based on reviews and was mislead. Might work for some but not me. I think it was about demons but not sure. Like I said this sounded like a podcast actually I've heard better podcast.