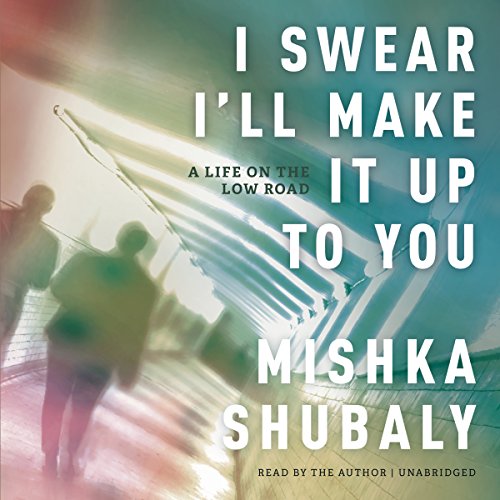 I Swear I'll Make It Up to You

I Swear I'll Make It Up to You

A misfit kid at the best of times, Mishka Shubaly had his world shattered when, in a 24-hour span in 1992, he survived a mass shooting on his school's campus then learned that his parents were getting divorced. His father, a prominent rocket scientist, abandoned the family, and their home was lost to foreclosure. Shubaly swore to avenge the wrongs against his mother but instead plunged into a magnificently toxic love affair with alcohol.

Almost two decades later, Shubaly's life changed again when a fateful five-mile run after a bar fight inspired him to clean up his life. And when he finally reconnected with his estranged father, he discovered the story of his childhood was radically different from what he thought he knew.

In this fiercely honest, emotional, and self-laceratingly witty book, Shubaly relives his mistakes, misfortunes, and infrequent good decisions: the disastrous events that fractured his life; his incendiary romances; his hot-and-cold career as a rock musician; meeting his newborn nephew while out of his gourd on cough syrup. I Swear I'll Make It Up to You is an apology for choices Shubaly never thought he'd live long enough to regret, a journey so far down the low road that it took him years of running to claw his way back.

Poorly written, self absorbed, garbage. I'm wondering how many books this man is going to write about himself. It is getting comical. Save your money.

A book abr mistakes, redemption and self discovery

I really enjoyed this book. I've listened to all of Mishka's kindle singles and, while this covers the same territory, it is rarely repetitive. He is brutally honest, never aims to be inspiring but manages it anyway, and is likeable despite himself. I love a memoir read my the author and his voice is just perfect for this, gravely and distinctive.

I loved this book. It was honest when being honest probably wasn't easy. There was so much I could relate to. I recommend it to anyone who struggles with being a flawed human.

This book makes you hope and believe that life can change.... and gives us insight into how to change it.

loved it - highly recommend to anybody who enjoys stories of trials, tribulations and overcoming it all in spite of total chaos.

There are no words that I can type that will do this book justice. Even the description of this audiobook doesn't come close to describing how much pain, joy, and pleasure is in this story.

I absolutely love it. I can't wait to read the rest of his work. His raw emotions and depictions of a life lived mirrored so many of my own, yet I could never put the words around it like Subaly has. Thank you Blackstone for believing in him and giving me this opportunity to enjoy this beautiful train wreck of life that I too am so familiar with. Cheers Mishka.

Let's be real, I could listen to Mishka read my grocery list and I would be all in! However, he hit it out of the park this time. I have listened to Mishka on podcasts and then listened to his other Kindle shorts so I was familiar with his story. I wondered what he could write that had not already been said (or implied). I was satisfied from beginning to end, laughed, cried all the good stuff. Thanks for putting yourself out there, well done Shubaly!

A huge THANK YOU to Mr Shubaly for writing such a memorable memoir. A painful look in the mirror for a broken soul. I'm certain it will be relatable for many. It will leave you hopeful.
P.S. Thanks to Doug Stanhope for turning me on to Mishka's music.

had to look up a few words, but loved all of it. made me look into me a little. not a bad thing! thanks Mishka

This book is deep but it's good to hear and the ending is fantastic. Hope your doing well still!

Trudging though this book, hoping this guy gets it, but he never does. I couldn't stand listening so I googled him to find out. All he does is trade alcohol for adrenaline and never faces why he drank to kill himself. A total insult to those who worked hard for sobriety taking the necessary steps. He will remain on "the Low Road" until he does. Don't be fooled by him or his successes, he's a broken man in total denial. I feel sorry for him.

Starts Strong - but eventually the running gets dreary

Mishka writes well and his story is an interesting one... to a point.
The first 2/3rds of the book are great, a fascinating story off one mans war with the world, his father and himself. His childhood and drinking days are fascinating and well told.
But then he starts running. And running. And talking about running. And the book just drags. I hate to say it as I loved Mishka when introduced to him through the Doug Stanhope podcast and he has had an interesting and in places heart breaking life - but I wouldn't recommend this book. The first 2/3rds yes. But I can't bear to finish it and hear any more about long distance running (gave up 1.45hrs remaining)

hard to listen to. as it should be. do it. it's painful and beautiful and terrifying

You gave me emotions, a##hole.

Having just bought this book on a whim after hearing Mishka on the podcast of that oft-named Stanhope's podcast, I didn't know I could love again.

A bad start to a review? Perhaps, but I'm not writing this for you. I'm writing for Shubaly in return for the gift he gave me.

This story isn't a story; it's a 'how-to', it's a 'not-how-to', it's a huge education gone to waste only to be fished out from that same New York garbage pile we've all seen. It's a rare and hopefully honest peek inside the mind and heart of a good boy done bad, then a bad boy doing well.

And most of all, I don't know why I love you. This book was a great way of spending a Sunday afternoon; no more so than writing those emails you've been putting off nor fixing that leaky sink you've promised yourself since back when. And the result is similar. The reader feels like they've learned something not only about the new love of my life, but about themselves.

And apart from the royalty checks and that tear you refuse to wipe away and that concentration you put into this book instead of fixing that stupid sink...isn't this what it's all about? Learning not only to love others, but to begin to understand and maybe love ourselves?

hateful, wrong and a disgrace

What would have made I Swear I'll Make It Up to You better?

if he hadn't written it. This is an awful book where the author brags and laughs about all the hateful things he has done in his life.

Would you ever listen to anything by Mishka Shubaly again?

None. I disliked the author's bullying, self righteous tones and although my sympathies go out to him as he lost his mother, it still does not justify his appalling behaviour both as a youngster and as an adult.

Don't buy - choose something else. Would like money back on this one - listened to an hour and decided my brain didn't need to hear this sort of garbage.