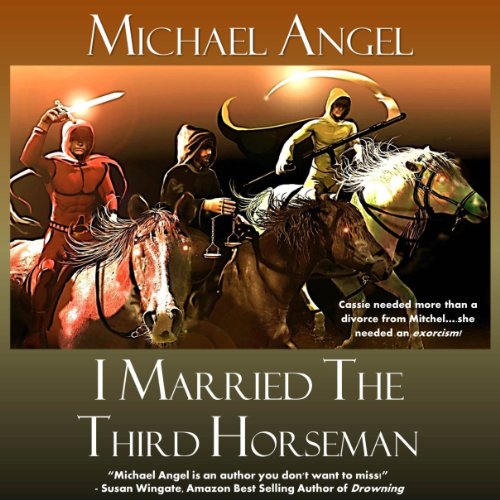 I Married the Third Horseman

When some women want out of a love gone wrong, they get a divorce. But not Cassie. She needs an exorcism.

When filmmaker Cassandra Van Deene takes the Sundance Film Festival by storm, it looks like the young, brash director has an unstoppable film career ahead of her. Then her fantasy lover - a handsome man on a white stallion - quite literally rides into her life! Mitchel Thantos, a man of shadowy means and with three mysterious brothers, sweeps her off her feet in a whirlwind romance, marries her, and takes her on a honeymoon to a tropical island made just for two.…

And that's when everything in her perfect, happy-ever-after ending of a life that Cinderella herself would have pawned off a glass slipper for starts going straight to hell.

Cassie wakes up at the crack of dawn, only to find Mitchel gone. She hears strange, animal sounds, followed by the tread of something wide and heavy outside the bedroom door. Her husband returns, acting as if nothing has happened. Night after night, the same pattern repeats itself. To her horror, everywhere they travel mysterious outbreaks of disease follow.

Desperate to find out the truth, Cassie rigs up a security camera on their porch to catch Mitchel’s comings and goings…only to see that her husband winks into and out of existence like a demon, a hellish thing of fangs and robes, riding atop his magical steed.

Upon confronting him, Cassie learns to her horror that the Thantos brothers are in fact the Four Horsemen, the paranormal creatures whose work will bring about the Apocalypse! The eldest, the brash Raphael, is War. The sinister Uri, Famine. The handsome, deceiving lover she has in Mitchel is Pestilence. And the shy, sensitive "kid brother" she’s befriended is none other than the Grim Reaper himself!

But Mitchel refuses to let Cassie divorce him, sending her on the run! Along the way, Cassie opens a Pandora’s Box of paranormal wonders and fantasy as she discovers that many of history’s mythological monsters are alive and well today - they just have day jobs. She meets Circe the Sorceress, who’s working the magic show at the Odyssey casino in Vegas. She battles demons who won’t cross holy ground, even if it’s a greasy-spoon diner. And then Cassie encounters the Great Sphinx of Egypt, the mother of all riddles and the writer of all the questions on the TV quiz shows, who gives her a cryptic clue that might just save the day.…

Will Cassie find a way out of the worst romantic relationship in history?

What listeners say about I Married the Third Horseman

Cassandra "Cassie" Van Deene is a smart, artistic filmmaker who takes the Sundance Film Festival by storm. Ka-ching!! Her career is bright and shining and the world is her oyster. Well, for about five minutes. Then she meets Mitchel Thantos. Yep, he is gorgeous, rich, and rides a real white stallion. What is to dislike?

Weelllllll . . . how about if your brand new hubby is Plague? Yep, that Plague. Oh, man! Of course, she doesn't know she is married to Plague. Not at first. But when her security cameras pick up Mitchel turning to a deaths head figure on that same white stallion - on the apartment balcony at that - it is time to run, run quickly Padawan!! For when all the divorce court judges come down with horrific diseases, it takes a bit of cosmic ingenuity to keep away from the homicidal brothers of the Apocalypse long enough to exorcize her preternatural hubby.

Michael Angel is hysterical. He mixes mythology, modernity and comedy in an immensely enjoyable tale of whacked out, obsessively possessive immortals, other immortals who have actual day jobs (Circe works the Las Vegas strip) and a strong, funny heroine with tons of attitude and guts. When you are being chased around the West by War, Famine, Plague and Death, well, you really have to be rather gutsy, wouldn't you think?

And Gin Hammond does a kickin' job as the narrator! I will listen to this many more times than once . . . how cool is that?